WEST CARLETON — The Ottawa River Regulation Planning Board (ORRPB) is expecting major flood levels to be ‘exceeded over the weekend’ the board released in a statement today (April 18).

“The Ottawa River Regulating Committee warns levels and flows on the Ottawa River, from Lac Coulonge down to the Montreal region, are expected to rise extremely rapidly starting this Friday due to forecast rainfall and snowmelt runoff,” the ORRPB said.

“Major flood levels are expected to be exceeded over the weekend. Later on, flows and levels similar to those observed at the height of the May 2017 flood may be reached depending on the amount of precipitation received. All flood-prone areas along the Ottawa River from Lac Coulonge down to the Montreal Archipelago are at risk.”

Two low pressure systems are expected to bring 30 to 80 millimetres of precipitation over much of the basin from Thursday through to Saturday. At the same time, warmer temperatures will melt a large portion of the remaining snowpack in the central areas of the basin.

“Rainfall and snowmelt will combine to produce very high runoff, causing levels to rise sharply on the Ottawa River starting this Friday,” the ORRPB said. |Levels are expected to exceed major flood levels, which are the levels at which several houses are impacted, over the weekend in flood-prone areas along the Ottawa River.”

Levels as high as those seen in May 2017, at the height of the flood, could be reached depending on the amount of precipitation received.

“Due to the forecast uncertainty it is difficult to accurately predict how quickly water levels will rise and when river conditions may peak,” the ORRPB said. “Residents of flood-prone areas are encouraged to closely follow evolving conditions and to take necessary measures.”

The committee will be reassessing forecast conditions and providing hydrological condition updates on its website daily. Reservoir Regulation Strategy:

The ORRPB will enact its Reservoir Regulation Strategy to try to mitigate the flooding.

“The principal storage reservoirs in the northern part of the watershed are expected to contain the majority of the increased runoff in those areas,” the ORRPB said. “However, dams located in the central and southern portions of the basin are essentially ‘run of the river’ with no significant storage capacity.

“As such, they cannot significantly reduce the flows and levels associated with increased spring runoff. During this critical freshet period, the regulating committee will take all possible actions to limit the amount of flooding and will continuously monitor conditions at all points along the river.”

If you think your property may be at risk of flooding, please contact your municipality. The Ottawa River Regulating Committee works closely at all times with provincial agencies responsible for issuing flood related messages.

In Ontario, Conservation Authorities and District Offices of the Ministry of Natural Resources and Forestry issue flood related messages and information to municipalities and other key agencies involved in flood preparedness and response. Current flood related messages can be viewed on-line on the individual conservation authority websites and on the provincial flood webpage.

The Canadian Red Cross has several suggestions for preparing for a flood and the aftermath:

Consult the Canadian Red Cross Guide To Flood Recovery for step-by-step instructions. Continue to take precautions and listen to and follow directions from local authorities. 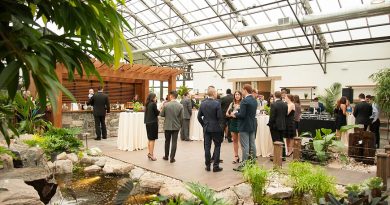 Romance at the conservatory