An author’s voice blooms suddenly, unbidden, active within the writer’s unconscious, until it clamours to be released.

What is an author’s voice? Voice is the author’s characteristic patterns and singular style, the quality that makes their writing distinctive, which speaks to the author’s personality and attitude, and helps the reader to deeply understand the written piece. New writers ponder what is their voice and style.

To help with the confidence of this knowledge, writers read a variety of works of others, and study the list of genres and their definitions, practice each genre, and then determine from where their own voice was born.

Once voice is determined, each writer guards safe their own individual voice. Their carefully crafted work must appear as intended; otherwise, the author’s work is skewed which completely loses the creative intent.

Boyd Blackwell, this column’s featured writer, is a writer of fantasy, science fiction, and horror. Boyd is a Carp resident who is temporarily located in Uxbridge, Ontario while working on family business.

He is an information request answering librarian who welcomes questions from the public. Boyd will resume his post as CCWG coordinator when he returns to Carp.

Enclosed is an excerpt from his flash fiction, The Seamstress, a two-page horror fantasy available on request at richard_boyd_blackwell@hotmail.com

The fiend tied up the zebras and dragged Chastity inside to a main room, which possibly once was a living space. Bodies and skeletons of local people were stitched into a grotesque tapestry along the wall. With a bit of intuition, Chastity was able to discern the story it portrayed. Apparently, a farm wife, who was a seamstress, repaired an outfit for a witch and accidentally left a needle inside, which pricked the witch. The witch cast a curse on the hapless seamstress, estranging the poor woman from common humanity, and giving her a needle covered appearance. The seamstress was doomed to walk the earth, betraying those kind enough that might help, and using the victims to complete her ghoulish tapestries.

The seamstress removed Chastity’s Guardian Order armour, leaving her in a simple tunic which was underneath, and got to work. Over the next few hours the evildoer sutured Chastity into a place of prominence in the tapestry. Chastity fell in and out of consciousness as the process involved the loss of a lot of blood and excruciating pain. The monstrous creature reapplied a paralyzing needle halfway after completing sewing the skin on the left side of Chastity’s body. She was about to complete the right side and start on Chastity’s head, when she stopped suddenly as her undead senses detected life. The wretch turned around to see what had entered her lair …

January 30: We thank Michel Weatherall for coming out to speak at CCWG at OPL Carp Branch. So much information, ideas, and his enthusiasm for writing inspired us all. https://brokenkeypublishin.wixsite.com

March: Join us as we welcome Kevin McGowan “The Paper Podcast”. Kevin is a professional producer, podcaster, and project manager, speaking about set up for success in podcast projects. 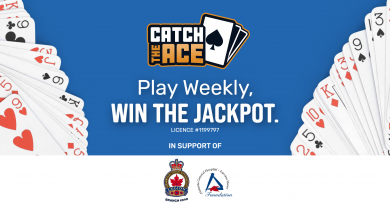 Catch the Ace in Almonte