OTTAWA – Ottawa Public Health (OPH) announced today (March 17) the city has reached the grim milestone of 450 residents succumbing to COVID-19 since the virus hit the city one year ago (March 13, 2019), as it reports one new death and 61 new cases in the community.

The weekly incidence rate is now at 48.8 per 100,000, which is well above the province’s red zone threshold of 40. The local positivity rate is 2.7 per cent as of today which is also higher than the 2.5 per cent red-control line. Ottawa chief medical officer of health Dr. Vera Etches said yesterday (March 16) she expects the city to be put under red restrictions within the next week.

The number of active cases has dropped for two days in a row, and now sits at 605. COVID-19 hospitalization numbers are down to 18, with five patients in intensive care with the novel coronavirus.

According to OPH, there are 24 healthcare institutions dealing with outbreaks of COVID-19 as of today, along with eight schools and two childcare centres. Three community outbreaks are being monitored as well – those are linked to one multi-unit dwelling and two warehouse workplaces.

Updated COVID-19 vaccine numbers state 79,659 inoculations have been administered in Ottawa, and the city has received 86,640 doses to date. The latest shipment of vaccines came from Moderna on March 13.

Ontario is reporting 1,508 new cases of COVID-19, Wednesday, with four in the Eastern Ontario Health Unit’s region, 25 in the Leeds, Grenville and Lanark district and two in Renfrew County.

PAKENHAM – Another person at Pakenham Public School has tested positive for COVID-19 bringing the total to three so far.

The Leeds, Grenville and Lanark District Health Unit says the individual was not at the school during their infectious period, and therefore does not pose a risk to staff or students.

This is the third person connected with the school to test positive for the novel coronavirus in the past two weeks.

The group, which provides independent advice and analysis to the Conservative government, said growth is taking place across the province.

“So, here we are, Ontario’s Third Wave,” the advisory group released in a statement yesterday (March 16). “Sadly, we are in fact all in this together. Ontario is organized into 34 public health units. Almost two-thirds are now experiencing exponential growth of (COVID-19).”

The findings come a day after the province’s top doctor said Ontario could be going into a third wave but the extent of it was still developing.

“You can always tell you’re in it after it’s over,” provincial chief medical officer of health Dr. David Williams said Monday (March 15). “I would say we are into that base of a third wave. What does that mean, how big it is? That’s to be determined.”

Premier Doug Ford said yesterday he will wait for Williams’ advice on the matter, but stressed people must continue to follow public health guidance even as more vaccines are administered.

“We can’t let our guard down for a second,” he said. “We have to be very, very cautious moving forward.”

Canada’s chief medical officer of health said Ontario has come to an “inflection point” in the pandemic after the province seemed to bring its second wave under control.

“What happens from this point on actually depends on the actions that are taken, as to whether this is a little bump or whether things might take off,” Dr. Theresa Tam said.

The Ontario Hospital Association said Monday it believes the province is now in a third wave, citing data from the science advisory group and saying the number of patients in intensive care is trending up.

The CEO of the Ontario Registered Nurses’ Association said the government lifted a stay-at-home order too soon, allowing the virus variants to spread.

Doris Grinspun said she fears the province will need to move back into lockdown.

“We need to be zeroing in 100 per cent on the vaccine now because this is our saving grace,” she said. “We are slow on the vaccines and we are quickly moving into the third wave. It’s a colliding disaster.”

The new data comes one day after the province launched a new COVID-19 vaccine online booking portal and call centre.

The province said Tuesday 133,000 aged 80 and older booked their COVID-19 vaccine appointments Monday despite technical issues with the website and long wait times to get through to the call centre.

On Tuesday, an additional 21,000 appointments were booked by noon.

Also Tuesday, the National Advisory Committee on Immunization said there is now enough “real-world evidence” to show the Oxford-AstraZeneca COVID-19 vaccine is both safe and effective for seniors.

The decision reverses a recommendation made by the body two weeks ago when the panel of vaccine experts said the company hadn’t included enough people over the age of 65 in its clinical trials.

Ford said the change was good news but expressed frustration comes days after Ontario used the earlier guidance to target distribution of the shot to people aged 60 to 64-years-old.

He said the province will fulfill the commitment it made to people in that age group as it incorporates the new advice.

“It just messes everything up, to be very frank with you,” he said. “We have everything set up, get everyone lined up, and all of a sudden, with no notice today, now we can move the goal posts again. So now we have to change everything.” 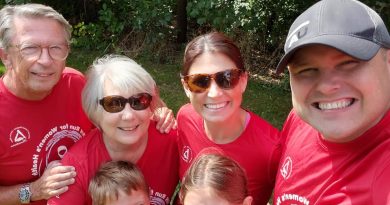