OTTAWA – Already charged with a Parliament Hill incident, an Ottawa man receives another charge related to a separate assault.

On Sunday, July 22, at approximately 7:20 a.m., frontline officers responded to a call for service for an injured 32-year-old male who was involved in an altercation with another male known to the victim.
On a walking path near the 4000 block of Bridle Path, two males got into a verbal argument. The male suspect, allegedly unprovoked, swung at the victim with a closed fist. The suspect then fled the area. The victim, noticing he had a cut to his hand immediately called 911. Ottawa Paramedics assessed the victim and transported him to a local hospital.
Officers did a search of the area for the suspect but did not locate him. A description was provided to officers of the 24-year-old suspect as well as a photo.
On Monday morning, the male suspect was arrested by Parliamentary Protective Service (PPS) and RCMP following a separate incident that happened on Parliament Hill. The male who was removed from Parliament Hill was handed over to the Ottawa Police Service.

Jesse MOONEY, of Ottawa, in relation to the Bridle Path incident, is charged with assault with a weapon, possession of a weapon, assault causing bodily harm and failure to comply with a probation order.
Mooney was also charged with assault and breach of probation in relation to the Hill incident.
Mooney is scheduled to be in show cause court today (July 24) for both matters.

UPDATE (3:55 p.m., July 24): The Ottawa Police is not pursuing charges in relation to the Parliament Hill incident. 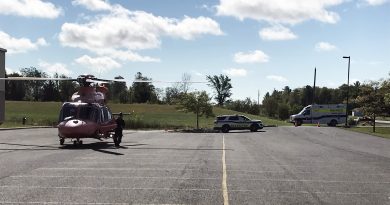