KINBURN – It’s been a dreary winter so far, so come shake those winter blahs Saturday, Jan. 21 as some of Canada’s top comedians come to Kinburn for a night of laughter.

Kinburn’s Kris Kingsbury, under his production company Brewing Up Laughs, has put together a heck of a line-up for Kinburn’s first comedy show of 2023, part of an ongoing series known as Comedy Night in Kinburn.

“Here is a chance to see one of Canada’s top stand-up comedians close to home,” Kingsbury, who also performs as a comedian, released in a statement yesterday (Jan. 8). “Come laugh away the blues of winter with an hilarious stand-up comedy show featuring some of the top acts from across Canada.”

The night will be hosted by Lewis Hill headlined by David Pryde.

“The host this month is the very funny Lewis Hill,” Kingsbury said. “Lewis is a rising star of the Ottawa community and has an energetic and interactive style. Lewis brings the party to every show. His humour is both self-deprecating, and quite deprecating, but he will do both with a big smile on his face. He’s also been known to pull out the guitar and play a few hilarious tunes.”

The night will include four comedians.

“Lewis will be bringing up three other incredible acts and our headliner David Pryde,” Kingsbury said. “David has recorded for Hubccap, Halifax, Winnipeg and Just for Laughs festivals. He also is a regular on CBC’S The Debaters. He is not one to be missed, so get your tickets today.”

West Carleton Online spoke with comedian Kris Kingbury last June as live comedy started to make its comeback from the COVID-19 pandemic and you can read that story here. 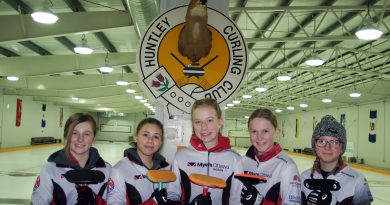