PANMURE – Right on time, Hudson’s Farm Fresh Produce’s hand-picked sweet corn is ready to go and the Hudson’s vegetable stand just across from the farm on Panmure Road opened for the season yesterday (July 29) to a line-up of fans of their popular produce.

What started out as ‘sweat corn’ 43 years ago in 1977 has become the gold standard of sweet corn in the West Carleton area and beyond. Yesterday (July 29) the stand opened for the first time this season at 3 p.m. and aficionados were ready to get their hands on the first sweet corn of the season.

“I dragged the first bag out to the road for the first time when I was 15,” Brian Hudson told West Carleton Online while it waited patiently in line. “It was our mother’s idea, to make some money while at school. Our sign said ‘sweat corn’ for the first couple of years and no one even mentioned it was spelled wrong. My mom was a teacher and she didn’t even tell us.”

It wasn’t so much a stand back then either. More of some teepees to keep the produce in.

Things have changed since then. Now there’s a stand. And because it’s the age of COVID-19, expanded safety protocols. The staff wear face shields. There’s no contact. Hudson has added a debit machine to the stand. And of course, the 2020 buzzword of the year, there is social distancing.

“COVID-19 has made it a different way of selling for sure,” Hudson said.

Hudson is always looking at improving the product as well. He grows his sweet corn on 35 acres of land, down from a peak of 60 acres in the past.

“We’re trying to do a better job with fewer acres,” he said.

Last year an incredibly wet spring delayed the planting as it took two extra weeks to be able to get the machinery on the land. It meant missing the long weekend – an important kick-off for the Hudsons, one they often spend at the Carp Farmers’ Market.

“We didn’t have corn until the middle of August,” Hudson said.

This year, the corn was ready right on time, but Hudson has had the opposite problem.

“Lack of moisture has been the biggest challenge,” he said. “We’ve had lots of heat. It was pretty cold at the start, but then the heat came and it really started to grow. The ground we chose this year has less clay then some of the other and seems to tolerate the drought a bit. I don’t know if that was luck or good management.”

The good news is “the birds haven’t been a problem this year,” Hudson said with a couple of knocks on his truck for good luck, although some racoons have been enjoying a bit of the crop.

One thing you are guaranteed at the Panmure stand, the corn is going to be fresh. His team picks it every morning for the opening of the stand. Any leftovers at the end of the day are not re-sold. So, Hudson makes sure to stagger his product through the season.

Unfortunately for Maple Sweet variety fans, Hudson says the seed company has discontinued that variety. But there are some great ones coming throughout the season.

“We’re known for our yellow corn,” Hudson said. “When people talk Hudson Corn, that’s usually what they are referring to. We were selling that when peaches and cream and bi-colour was what was in the other stands.”

The stand is open from 9 a.m. to 6 p.m. at the corner of Panmure and Upper Dwyer Hill roads. The stand also has new potatoes, zucchini, cucumbers and beets.

3 thoughts on “Hudson corn is here” 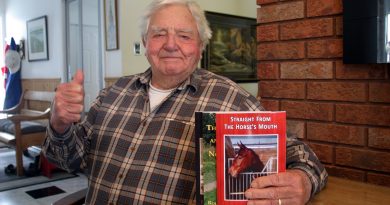