WEST CARLETON – Catholic churches in Fitzroy Harbour and Constance Bay are making changes in service as the religious centres adapt to Ontario’s state of emergency.

“As you may have already heard all public masses and church gatherings have been suspended until April 5,” Father Orban said. “Below are some clarifications from the Archdiocese as to what we are still allowed to do in the church.”

“Given these instructions, I will be present during all regular mass times on the weekend and on Tuesdays between 6 and 7 p.m. at St. Michael for private prayers and devotions should anyone feel the need to do so,” Orban said. “Stations of the cross can continue at St. Michael on Sunday between 9 and 10 a.m. and at St. Gabriel’s between 3 and 4 p.m. on Friday. Please remain at home if you are feeling unwell or if you feel that coming to church might pose an unnecessary risk to yourself or someone you care for.”

Orban asks those who come to church during the aforementioned availabilities to please keep a safe distance of about two metres between people “you don’t normally associate with.”

Sacraments of the Sick and Reconciliation will be available upon request.

“This is truly a challenging time for everyone and we will all have to make many sacrifices in order to help each other through this,” Orban said. “Rest assured of my prayers and willingness to help you in any way that I can, please do not hesitate to call me or others in the community for help or to offer help where possible.”

The Archdiocese of Ottawa announced on March 17 the suspension of masses amid the current health threat due to the novel coronavirus COVID-19.

“It is with regret that we must temporarily suspend all public celebration of the Mass and other gatherings of Catholics in the Archdiocese,” said Archbishop Terrence Prendergast in a statement to the clergy, religious, and faithful of the Archdiocese. “This extraordinary step is being taken out of concern especially for the most vulnerable to the deadly coronavirus in our families and our society and in cooperation with the requests made by those responsible for public health in our region, province, and country.”

The request to limit the size of groups gathering for social and even religious purposes made taking this step necessary. The Archbishop noted that this was a difficult decision not taken lightly because of the central role that the mass plays in Catholic life.

He requests continuing prayers for those who have been afflicted by the virus, their families and caregivers as well as those who are fearful at this critical time.

“We need also to keep in our prayers the medical professionals—the doctors, nurses, public health and civil authorities striving to assist those who are ill and to contain the outbreak,” the Archbishop said.

Catholics are encouraged at this time to participate in the holy sacrifice of the Mass via Mass shown on television or the Internet. They are invited to continue to pray at home with their families and join with the virtual mass by making an act of spiritual communion. Initially, the suspension of the public celebration of Masses will be from March 18 to April 5. Decisions regarding the celebration of Holy Week and Easter will be taken later. 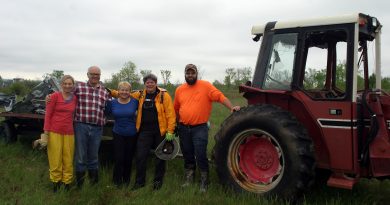