WEST CARLETON – While the dozens of agricultural fairs that generally run between late summer and early fall, its been a tough year to say the least. For those whose businesses depend on those fairs for work, its been devastating.

The operators who provide the rides and entertainment at these fairs are an industry, and it’s an industry that has received zero revenue this fair season.

Due to COVID-19 and all, if not most, outdoor events being cancelled, many of Ontario’s fair and carnival operators have completely lost their 2020 operating season.The Canadian Association of Amusement Operators (CAAO), which represents the carnival business that provides rides, games and carnival foods to fairs, festivals and special events from coast-to-coast, is calling on the Government of Canada to preserve the cultural, heritage and economic contributions of these events.

The CAAO is a fairly new association representing the industry. While it formed before the pandemic began, COVID-19 really “galvanized” the association. CAAO directors Andrew Gidaro and Geordie Todd spoke with West Carleton Online this morning (Sept. 23) about the devastating year the industry is trying to survive and their efforts to lobby the government for assistance.

“When this thing hit, and we realized we weren’t going to be getting out this year, we knew we needed to get together,” Gidaro said of the more than 110-member association. “We’re hurting, really badly.”

The industry’s supply chain represents an annual economic impact of $2.9 billion, with individual amusement operators employing a range of seven to 100 employees. Every dollar amusement and fair organizations operate sees an average of $4.54 put into the local economy. Since the government-mandated shut-down in March, the industry has already lost almost 100 per cent of its projected 2020 revenue – equal to a loss of $500,000 to $1 million in revenue per operator. Despite being unable to operate, many expenses have continued regardless, including rent, insurance, storage, and equipment maintenance.

Todd is involved with All Canadian Entertainment and his business has served the Arnprior Fair, Renfrew Fair and Kanata’s Canada Day celebrations in the past.

“It’s a big blow,” Todd told West Carleton Online. “Fairs are main economic drivers for a lot of agricultural societies. The 2020 season was completely lost, and we don’t know what’s going to happen in 2021. We’re coming up on more than a year with no income.”

Todd says if his industry crashes, the fairs themselves could be at threat.

“What’s a fair without a midway?” he said.

The Arnprior Fair was facing incredible challenges even before COVID-19 hit. In recent years the fair had lost thousands due to declining attendance, in 2014 their midway dropped out days before the event due to border issues, unfortunate timing with inclement weather and other obstacles. Last year the fair was held at a new location near the Arnprior Airport. The fair board had to sell the fairgrounds to pay off debt. Todd worked with organizers to ensure the fair could have a midway at a cost that was manageable.

“The fairs are already having a tough time before COVID-19,” he said. “This could be a death knell for some of the smaller fairs.”

While almost all midway operations were without a source of income this year, the bills continue to add up. Maintenance, upkeep and safety are a year-round task. Todd says anyone with a history in farming can relate to the midway industry.

“It’s akin to farming,” he said. “A lot of the businesses are multi-generational with not a lot of people looking to get in to it. It’s a lot of work.”

The CAAO is working on convincing the government to find a way to support the industry. But are not asking for a handout.

“Ninety-nine per cent of businesses have been able to re-open under the province’s Stage 3 of it’s COVID-19 recovery plan,” Todd said. “We’re the one per cent.”

The organization has hired a lobbying firm and is currently undertaking a media and awareness campaign to inform the greater community on the issue.

“We’ve had some meaningful conversations with some MPs and ministers,” Gidaro said. “I think they hear us and realize there’s a need, but we still have to bang the drum. We’re not asking for a handout; we want to work.”

“We’d love to find a bridge financing solution,” Todd said. “So, we can remain alive.”

For more information on the association, you can visit their website here.

One thought on “Fair midway operators devastated by COVID-19” 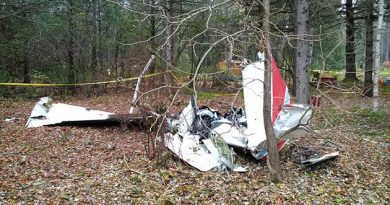