FITZROY HARBOUR – It was a winter celebration and the celebrants of Fitzroy Harbour were lucky enough to experience all kinds of different winter weather to celebrate during their four-day winter carnival.

The annual Fitzroy Harbour Winter Carnival, held at the community centre from Feb. 7 to Feb. 9, was four days of fun on the ice, in the snow, and sometimes, indoors – just to appreciate it all that more, you know?

West Carleton Online visited the carnival Saturday afternoon and spoke with some of the volunteers taking a quick break between Friday’s activities, while getting ready for Saturday’s events.

Thursday night was all about spaghetti and hockey.

About 50 people came out for the Thursday night spaghetti dinner and the Country vs. the City Outdoor Hockey Game.

The dinner was a fundraiser for the Arnprior Wrestling Club which is coached by Harbour legend Kevin Mayhew.

The hockey game pitted area City of Ottawa staff versus a squad of country boys from the Harbour.

That’s where details get hazy. Allegedly it was a non-competitive game, yet others state the city team won 6-4. Again, that was up for some dispute at the table of volunteers.

They could all agree it was a great crowd and the “freezing rain held off – it was cold, good ice.”

Friday night was billed as Family Fun Night. There was a skating party, bonfire, marshmallows and hot dogs as well as some youth broomball.

It was also Dan and Carole’s Trivia Night – a tradition like no other at the winter carnival. Teams of six battle for trivia supremacy, and occasionally dress up, to hopefully be named Trivia King.

Co-organizer Dan McCaskill reports 132 trivia buffs came out for the event. The winning team was the Boland brothers, along with Marc and Lindsay.

Saturday was for the kids. The West Carleton Outdoor Hockey League Fitzroy Harbour teams hosted home games all morning at the ODR. Following that there was family skating and kids’ activities with live music from The Hashtags. Saturday night Pub Night closed the carnival. 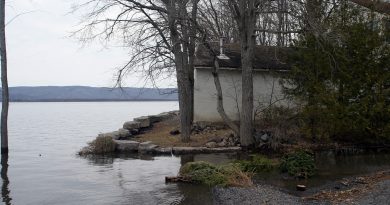