FITZROY HARBOUR – Even threat of a record-breaking snowfall was not enough to deter the City of Ottawa from hosting a bridge info session at the Fitzroy Harbour Community Centre on Feb. 12.

While the snow blanketed West Carleton with 30 centimetres of snow Tuesday night (Feb. 12) in to Wednesday morning, Coun. Eli El-Chantiry and three Fitzroy Harbour bridge rehabilitation project staffers huddled inside the community centre, ready to share details of the project with anyone who dared venture out that night.

And one lone sole did make it out that snowy evening – West Carleton Online.

“It’s a major rehabilitation,” McIntosh Perry engineer Christine Shillinglaw said of the bridge that spans the Carp River on the way out of Fitzroy Harbour along Fitzroy Street.

The bridge was built in 1958; the superstructure was replaced in 1980; and in 1994 it underwent a major rehabilitation.

“This work will be similar to what happened in 1994,” Shillinglaw said. “A lot of concrete repairs.”

This rehab may be the last the bridge undergoes, as this work is expected to last the structure until the end of its useful life.

“It was probably designed for 75 years,” Shillinglaw said. “Unless there are changes to regulations in that time, this work should be good for about 25 years.”

The project has not gone to tender yet, so no budget figures are available. Construction will start in May and end in December.

The bridge will remain open during construction, but traffic will be reduced to one lane with lights at either end of the bridge.

Those vehicles will have to take the six-kilometre detour in place, from Canon Smith Drive to Galetta Side Road to Harbour Street.

“One key feature is we will be maintaining pedestrian access,” Shillinglaw said.

“Emergency services are aware of the work being done as well,” Brown said. “And we’re keeping a navigational path open underneath for canoes and kayaking. We know people use this part of the river for that.”

That opening will be six metres by two metres.

“There is no in-water work being done,” Shillinglaw said.

When asked why staff decided to go forward with the meeting in the midst of this winter’s worst snowstorm, when several other city-scheduled meetings were being cancelled including the city’s Feb. 13 council meeting, the answer was based on location.

“We contemplated that,” city program manager Luc Marineau said. “We felt since most interested parties and stakeholders lived in Fitzroy Harbour, we knew they were fairly close by.”

“And we knew you were coming,” El-Chantiry added. 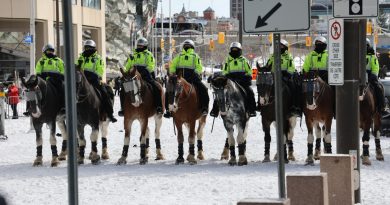 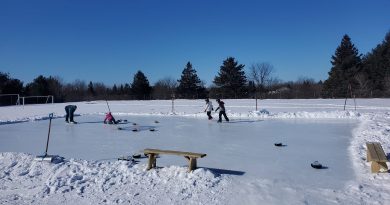