WEST CARLETON – “We are now beyond our city’s capacity.”

That was Mayor Jim Watson’s message moments after declaring a state of emergency for the City of Ottawa today (April 25) due to a forecast that expects flooding to quickly increase over the next few days.

Today was another day of fast-paced change as experts across the region tried to prognosticate the severity of the flood and how best to deal with it.

The Ottawa River Regulation Planning Board (ORRPB) updated their flows and levels forecast and now expect the Ottawa River will peak 11 centimetres higher than in did during the May 2017 flooding.

“The ORRPB forecasts water levels in the Constance Bay area to rise an additional 0.80 metres to 1 m above the current elevation over the next three days,” the Mississippi Valley Conservation Authority released in a statement today. “Levels are currently forecast to exceed those experienced at the height of the May 2017 flood by approximately 0.50 to 0.70 m. Updates to this projection will be provided as they become available.”

“We have declared a state of emergency in the City of Ottawa due to the most up to date projections of precipitation and flooding in our region,” Watson said during a press conference today at 4 p.m.

“As a result of worsening conditions and the significant rainfall we are expecting, we formally requested the support of the Canadian army,” Watson said. “Both levels of government agreed to this request and we hope to have up to 400 soldiers in key areas tomorrow. Earlier today I made an official request to Premier Doug Ford and the solicitor general of Ontario to assist in our efforts.”

It has been confirmed 400 soldiers from Garrison Petawawa and the 1st Battalion of the Royal Canadian Regiment (1RCR) will be headed to West Carleton to begin sandbagging operations and helping residents in need.

Watson said Premier Ford “is fully behind us,” as is the federal government.

“I also recently spoke to federal Public Safety Minister Ralph Goodale and he assured us the government of Canada is here to help,” Watson said.

The mayor said the flood threat is now too big for the city to handle on its own.

“This truly has been a great community effort so far but with the weather and worsening conditions and the expected water levels we are now beyond our city’s capacity and that is why we’ve called in the armed forces,” he said. “We have moved to this state of emergency to ensure we have the capacity to keep our residents safe and to protect property. A dedicated staff and hundreds of hundreds of volunteers have worked tirelessly for more than a week and I want to thank them sincerely for helping our city through this situation.”

Sandbagging operations in Constance Bay also seemed to reach its peak (so far) today. Around noon, officials said more than 100 volunteers (80 of them first timers) had shown up, but that was still not enough to meet the demand as a long line of vehicles waited patiently to fill whatever space they could with sandbags.

Visitors will be able to speak to representatives from the city’s Community and Social Services department and Ottawa Public Health.

Representatives from the Canadian Red Cross and The Salvation Army will also help triage resident needs, answer resource questions, and follow up on resident inquiries or direct them to the appropriate service.

On the other side of the bay, more than 30 volunteers and homeowners were filling sandbags on Armitage Avenue – a high risk area.

“It’s literally neighbour helping neighbour,” volunteer Shelley Welsh said. “There are 50 plus homes here that are high need. A man just came by, I didn’t get his name, and said he had minutes before the water made it to his home. There are four, five, six trailers in the queue all the time. The traffic is always flowing. They get out and sandbag while they are waiting. It’s nice to see all the support.”

The Sobey’s on March Road dropped by “a ton” of food and drinks. Later in the day, the Constance Bay Pharmacy and Happy Times Pizza dropped off a stack of pizzas.

Welsh, who lives in West Carleton, says her home is safe from flooding. Her son Blake Voelker took the day off of school to help out with sandbagging.

“I know some people can’t be here to look after their homes,” she said. “I can’t imagine the worry of having to rely on a neighbour to save your house.”

Armitage Avenue resident Ally McCarthy is one of the ones whose house is at risk. It’s the second time for her.

“We’re going to lose our house for the second time,” she told West Carleton Online from a tent at the Armitage sandbagging station. “It took us a long time to recover last time. The water is very high right now. I don’t know what to say to you. I’m a little distraught.”

But she’s buoyed by the support she has received from her community.

“They’re going great,” a very clearly stressed McCarthy said of the preparations. “All the people, the fire department, the volunteers, my family, everybody’s helping out and I couldn’t ask for anything more. This is our second time through it and we don’t know how bad it’s going to be, but it’s supposed to be worse than two years ago. Here we are, everyone’s helping out. My family is here, my friends and the firefighters, they’re doing everything they can for us.”

So far, more than 1,200 volunteers have registered with the city to help with flood preparations. That doesn’t include the volunteers who show up at ‘unofficial’ sandbagging stations like those in Willola Beach, Armitage Avenue and MacLaren’s Landing.

Kanellakos, who recommended the mayor declare a state of emergency, says the situation is very fluid.

“I can say with certainty the flooding situation now has changed in the blink of an eye,” he said. “Yesterday morning we were okay. Our assessment was we could get through this with our own resources, we felt equipped with enough resources to cope with the flooding. But today we received some bad news with the weather (Additional 35 mm by Saturday morning). Together with accelerated snowmelt in the fields that feed the rivers, we were now getting estimates from the ORRPB that we will reach 11 cm above the May 2017 peak conditions. The number of requests for help was increasing and flooding was imminent. We were reaching our capacity in terms of being able to serve the requests from our residents. We do not have the resources to meet all these needs.”

Kanellakos says the state of emergency will allow the city to help more residents.

“Getting help in quickly will allow us to assist the people who are now at risk of having their homes flooded,” he said. “It will also allow us to enhance existing sandbag levels to address service requirements for help.”

But Kanellakos could not say enough good things about the volunteer effort.

“Ottawa has a lot of heart and all these volunteers come out to help over and over again even as recently as last fall’s tornado,” he said.

Kanellakos is not sure how long the city will remain in the state of emergency.

“I can’t say how long we will be in this state of emergency,” he told reporters. “If the flooding is severe it could be weeks of recovery operations. Our commitment to the residents of the city is we will be there to help.” 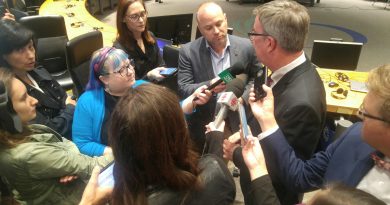 City to get to work on new Official Plan