WEST CARLETON – A flood warning was issued for the Mississippi and Carp rivers’ watershed and a Flood Watch for the Ottawa River at noon today (April 17).

For West Carleton residents following the coverage of the spring thaw on West Carleton Online, witnessing the growth of area rivers, creeks and streams over the last week, it seemed inevitable.

“Forecasted rainfall amounts of 50 to 65 millimetres – some forecasts indicate higher amounts – from Thursday to Saturday and expected warmer temperatures will melt the remainder of the snow in the watershed and cause water levels and flows to increase above current conditions,” the Mississippi Valley Conservation Authority (MVCA) released in a statement today. “Severe flood levels could be reached by Sunday depending on where the rainfall occurs and total amounts received.”

At this time, the majority of tributaries flowing into the Mississippi River including Buckshot Creek, the Fall, Clyde and Indian Rivers have either stabilized or begun to decrease but are still at above average flood conditions, the MVCA said.

“Flows in the Carp River have also begun to drop,” the MVCA said. “Levels on lakes in the upper Mississippi watershed have been steadily increasing and many are still ice covered. Levels on Dalhousie Lake have stabilized and are expected to remain close to where they are for the next 24 hours. Levels on Mississippi Lake are expected to increase by 10 to 30 cm over today’s levels by Thursday. Other areas of the watershed not specifically identified should expect conditions to stabilize or drop over the next 24 hours.”

This Flood Warning is in effect until April 21 and will be updated at that time unless the forecast or conditions change.

The MVCA has also issued a Flood Watch for the Ottawa River in conjunctions with the Rideau Valley (RVCA), South Nation Conservation Authorities (SNC) and Ministry of Natural Resources and Forestry (MNRF) Kemptville District.

“We caution residents along the Ottawa River that water levels are expected to increase significantly over the weekend and into next week,” the MVCA said. “However levels are not expected to reach those observed at the height of the flood in 2017 at this time.”

The current snowpack throughout much of the Ottawa River basin remains at twice its normal depth for this time of the year.

“Meteorological forecasts indicate two low pressure systems will be combining to produce significant rainfall (30 to 55 mm) throughout the Ottawa River watershed beginning on Thursday,” the MVCA said. “Combined with spring runoff from the central and southern portions of the watershed, this precipitation is expected to cause a rapid and sustained increase in water levels and flows on the main stem of the Ottawa River. The Regulating committee will be reassessing forecast conditions and providing hydrological condition updates on its website daily .”

Residents are advised to stay away from watercourses where flows are high and where banks might be unstable. Parents are encouraged to explain these dangers to their children.

The MVCA Flood Watch statement is valid through April 23. Additional statements will be issued when or if conditions are expected to change significantly from this outlook.

City staff “continue to monitor conditions in communities that have experience flooding in the past,” Coun. El-Chantiry said earlier this week. “If you see flooding issues in your area please call 311.”

El-Chantiry says the city has 275,000 sandbags ready to go if flooding issues persist through spring.

The city has distributed sand and sandbags at various locations in West Carleton including:

“Make sure to bring your own shovels,” El-Chantiry said.

Parents are encouraged to remind their children about hypothermia and the dangers of playing on or near ice covered surfaces or fast flowing water in ditches and smaller creeks. They are also reminded to keep their pets away from the same areas. Residents are strongly urged to stay off all ice covered waterways.
Residents in flood prone or low lying areas, historically susceptible to flooding, should take the necessary precautions to protect their property, such as:

Ensuring sump pump is clear, in good working condition and has a backwater valve on it

Removing or securing items that might float away as flows increase

Familiarize yourself with your municipality’s emergency preparedness plan

Daily water levels and flows are available on the MVCA website at www.mvc.on.ca. 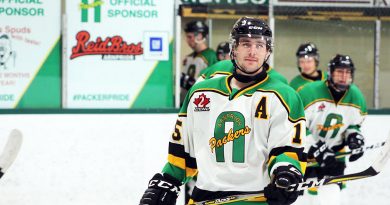