FITZROY HARBOUR – The west Carleton Electric ran in to a very hot pitcher last night and the Orleans Rebels got their first win of the season in Greater Ottawa Fastball League action last night (Aug. 19) in Fitzroy Harbour.

The Rebels defeated the Electric 7-0 in a game called after five innings due to the runs rule.

Rebels pitcher Andy Barber earned the wind striking out 14 in only five innings. Barber only allowed one hit by Kinburn’s Trevor Barton and walked one batter.

The Rebels had a five-run inning in the second to secure the win.

The Rebels’ Jeff Roman went two for three in the game with two doubles and two runs scored for Orleans. Rebel Jeff Barber was two for two with a walk and run scored. The Rebels’ pitcher also was handy with the bat hitting a home run and earning a walk.

The Electric called up to 16-year-old players from the Jr. Electric in an emergency move to fill the roster.

The loss drops the Electric to a record of two wins and three losses at the halfway point of the season. The Electric sit in third place in the six-team league but do have one game in hand after the first game of the season against the Micksburg Twins (4-1) was rained out.

The Rebels improve to one and five but still sit in last place in the GOFL.

The Electric return to Carp next Thursday (Aug. 26) for a rematch against the Ottawa Valley A’s. The Electric beat the A’s 6-5 on Aug. 12.

In Wednesday (Aug. 18) night action the A’s won the early game in Manotick 2-1 over the Brewers. Adam Rueckwald had the win, striking out 14 and allowing five hits. Luc D’Entremont took the loss, allowing six hits. Sean Lecuyer drove in both Valley runs.

The late game saw the Kars Aces hand the Twins their first loss of the year, winning 9-4. Cory Alkerton had the pitching win, and hit a homer to help his cause. Noah Fleurie took the loss and had relief from John Enright.  Jared Steege hit a homer for the Twins. 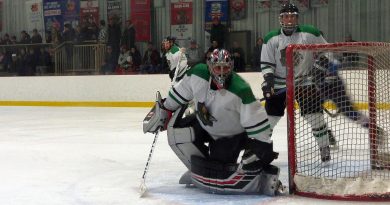 One game will decide EOSHL champs

Help win the fight against the flu