WEST CARLETON – Right before the official start of Thanksgiving Weekend (Oct. 9), as COVID-19 numbers skyrocketed in the province, the Doug Ford Conservative government announced it was banning dine-in eating at restaurants in Ottawa, Toronto and the Peel Region in an effort to control the spike in cases in those three locations.

West Carleton Coun. Eli El-Chantiry says the timing of the announcement couldn’t have been worse.

“I find the timing disheartening,” El-Chantiry told West Carleton Online Saturday, Oct. 10. “Why didn’t you make the decision earlier in the week?”

Before El-Chantiry was a councillor, he had a 33-year career as a restaurateur, including many years spent as the owner of the Lighthouse Restaurant in Constance Bay. He knows what kind of work goes in to preparing for Thanksgiving Weekend. Lots of turkey bought for the festive meals restaurants serve over the weekend, potentially gone to waste.

El-Chantiry feels these new restrictions are related to the “two idiots,” who went bar hopping on Elgin Street while awaiting their COVID-19 test results in early October. That event eventually closed down five bars on the street.

El-Chantiry feels restaurants have been playing ball in regards to COVID-19 safety procedures and these closures are going to hurt an already beleaguered industry.

“Where is the evidence that supports this decision?” El-Chantiry said. “There was quite a bit of debate on the decision to close the restaurants. But we don’t know what the evidence is to back the decision. I’ve supported the premier in all his COVID-19 decisions, but this one, I’m in disagreement with.”

“Ontario’s restaurants have made major investments in health and safety equipment and training so they could continue serving their communities throughout the COVID-19 pandemic,” Restaurants Canada vice president, Central Canada. James Rilett said. “They are now being asked to severely restrict their operations to help the province contain rising community spread. Doing so will come at a steep economic cost for communities impacted by these restrictions if all levels of government don’t step up with emergency assistance to help them pull through.”

Ontario’s foodservice industry lost more than 215,000 jobs by April and is on track to lose as much as $17.8 billion in annual sales compared to 2019 due to the impacts of COVID-19, Restaurants Canada says.

In West Carleton, the Juke Joint Soul Kitchen was ahead of the curve. On Oct. 6, co-owner Corri Greenberg announced it was suspending its dine-in operation.

“In light of the recent rise in COVID-19 numbers and in the interest of keeping everyone, our staff, family, and customers, safe, we are choosing to revert back to take-out only,” she said at the time.

Those who have stayed open, tell the councillor the new restriction will be challenging.

“The people who reached out to me are frustrated,” El-Chantiry said. “They were shopping Wednesday and Thursday, getting ready for the weekend. Then Friday at 2:30 p.m., the government shuts them all down.”

El-Chantiry finds the restriction at odds with the current situation.

“All along (Ford) has done a good job and said he was making evidence-based decisions,” El-Chantiry said. “Why 100 people can be at Walmart but our small businesses have to shut down? How is West Carleton going to compete with places in Arnprior where you can go and sit down for a meal?”

Aside from El-Chantiry’s long career in the food service industry. He also sits on the city’s Economic Recovery Taskforce, the Busines Advisory committee since 2005 and is the mayor’s representative on the City of Ottawa’s 19 Business Improvement Areas.

He said he had no inkling this restriction was coming until he heard about it Friday.

At tomorrow’s (Oct. 13) council meeting, El-Chantiry says he will be introducing a motion asking council to officially support n Ottawa Coalition of Business Improvement Areas (OCOBIA) “strongly-worded letter to Premiere Ford to request the province’s reconsideration of their policies due to the extremely negative impact to small business.”

I have been very vocal since the latest provincial restrictions went into effect, which are doing great harm to our Ottawa small businesses community,” El-Chantiry said. “In many cases, these latest restrictions will be the final nail in the coffin for many local businesses. My hope is that getting city council’s support of OCOBIA will add some additional pressure on the province to reconsider some of their latest restrictions and policies.”

“If I sound passionate, it’s because I feel for these people,” he said. “Having to tell the single mom, ‘sorry, don’t come in to work tomorrow.’ I know servers that make well over $100 in tips on a Thanksgiving Weekend day.”

Celebrate seniors’ month at the library 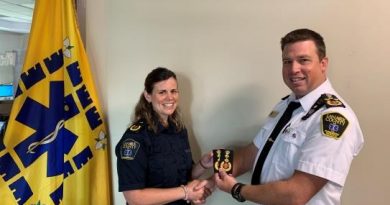