Early last week (Jan. 3) the Province of Ontario announced new COVID-19 restrictions which included a ban on indoor dining. It’s the third provincial lockdown in the last year related to the pandemic. A collective sigh from Ontario’s beleaguered restaurant owners was heard across the province.

Social media was abuzz with the ‘hilarious joke’ restaurants could open their patios in the middle of winter to help generate revenue.

“We just decided, I’ve had such a hard time trying to keep my staff as employed as I could over these last two years, and we just didn’t want to take another step backwards, so we though we would try this,” Therrien told West Carleton Online from just outside the lighted fence of his outdoor space. “We have a lot of Muskoka chairs, I have more at home, I have more all over the place. We brought some furniture from other people, and we set up seven pits and people have really responded well to it.”

The patio was already picking up steam at roughly 4 p.m. Sunday (Jan. 9) when West Carleton Online dropped by, with a small waiting list for seats. On Saturday (Jan. 8), Curtis Chaffey performed while the Dairy Distillery put on a tasting of their Vodkow cream and coffee. On Sunday Zach Martin was set to entertain with Sortilege providing hot après tastings of Sortilege Whiskey’s infused with maple syrup.

Saturday evening was the coldest day of this winter so far with a reported low of -14 degrees Celsius but with a significant wind chill on top of that. That cold wasn’t enough to keep the hardy residents of Ottawa away though.

“We were jammed, we were full right through to close last night (Saturday), we had live music playing up here, we have live music again tonight,” Therrien said. “We had Vodkow come out from Almonte and do a tasting of their Vodkow cream and coffee for everybody. People were in to it. We were burning wood, they were wrapped up, lots of snowsuits, it was good. It wasn’t intolerable, a lot of us were here, I was here from 10 p.m. until close last night, and I never felt too cold. Everybody’s spirits were warm, everyone was in a good mood, and I think that was a big part of it. Everyone just bought in to having a good time, and it was easy.”

People are exhausted after two years of the global pandemic and last week’s lockdown announcement was hard to take – considered by many a major step back after roughly eight months of vaccinations and a year-and-a-half of creating best practices for dealing with COVID-19. Therrien says, that in part, led to the busy weekend.

“They’re just looking for something to do,” Therrien said. “People are bored. They want to support, and if they can support in a way that’s fun for them as well, then it makes it really easy for everybody.”

And for a person in the hospitality industry currently under siege from COVID-19, that support means the world to Therrien.

“It’s everything,” he said. “it’s what keeps you wanting to come up with new ideas, it’s feeding you to keep pushing forward and not just sit on your hands and be sullen about everything that’s going on. It’s a lot of fun. They come out and everyone is thanking us for putting fires on, and we’re thanking them for being here. It’s fantastic.”

Click here to see video of a Cheshire Cat patron enjoying a bite of a tasty, ice-cold beer. 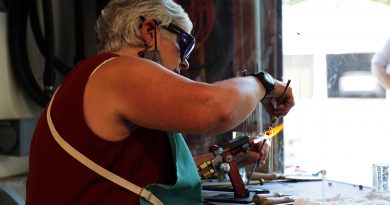