CARP – For the second time in five elections, Ottawa Catholic School Board Zone 1 Trustee John Curry has been acclaimed.

Curry, sat down with West Carleton Online Aug. 17 at Alice’s Village Café to talk about his time in Catholic education and issues facing school children in West Carleton.

“I was certainly prepared to run a campaign,” he said. “When you are acclaimed you always wonder if it’s because people don’t care or you are doing a good job. I try to be positive.”

Curry is a long-time journalist in west Ottawa. He was a long-time owner of the Stittsville News which he bought in 1975 for $6,000 before selling it in 2001. He stayed on as a journalist and was even editor of the West Carleton Review for a few years up to the paper’s demise. He now works for the Kanata-Stittsville Community Voice, a new, twice-monthly paper established earlier this year.

He has been the Catholic school board trustee since 2001.

“You are always learning,” he said. “Over the years you learn more and more and hopefully become better and better at your job.”

“It makes it a bit of a challenge for St. Mike’s graduates in Fitzroy Harbour,” he said. “It’s a long haul, so most end up going to West Carleton Secondary School. A couple go to Arnprior District High School. You can understand why they do the switch.”

St. Michael’s Fitzroy Harbour is the only Kindergarten to Grade 8 school in the Catholic school board – all other elementary schools stop at Grade 6.

Curry says St. Michael’s does this because of the distance to a Catholic school that starts at Grade 7.

“This way we don’t lose students to Stonecrest at Grade 7,” he said.

Zone 1 includes West Carleton, Stittsville and some of Kanata. Curry says issues that arise aren’t unique to each area of the zone.

“I found over the years there isn’t much difference between parents and students in, say Stittsville and West Carleton,” Curry said. “They have the same concerns, the same mindset, the same goals.”

Over those years Curry says he has seen much improvement in both transportation and communications.

“They seem to be operating much more smoothly the last few years,” he said. “You listen to the concerns and you make your best argument.”

There is a big change coming this school year with the first Conservative government since 2003.

Curry says the board also expects changed in the way math is taught and the government is expected to “investigate the Education Quality and Accountability Office (EQAO) testing.”

“We saw how quickly they can change policy with the Toronto municipal changes,” Curry said. “We have to be vigilant we aren’t subject to quick change like that. We have to make sure we meet early with the new MPPs and show them our schools and develop a relationship with them. We have to show them how important Catholic education is to our community. That has to be a priority.”

Within his zone, Curry says there is change coming to Fitzroy Harbour. Principal Penny Zorn will take over for outgoing Principal Dwight Delahunt. Delahunt was principal at St. Michael for the last six years and is moving to St. Isidore.

One issue affecting rural students in West Carleton is the lack of quality Internet service.

“We have to investigate and advocate for better Internet service in the rural areas,” Curry said. “More and more learning is done online. If you don’t have that access, you are working at a disadvantage.”

Another issue affecting Catholic students at St. Isidore is the gym. The roughly 400-student school has a gym much smaller than those found in other schools of the same size in the board.

“The board has drawn up plans for a new gym and renovations,” Curry said. “Hopefully, sometime soon, the board will have the resources to get that done. Students across the board should have access to the same facilities. The board is aware and hopefully that will get done.”

Trick or treat with the mayor 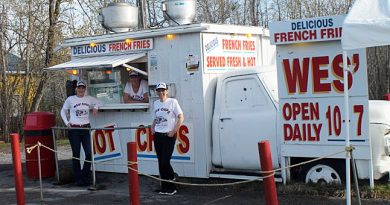