CARP – Following two Ward 5 all-candidates debates, if the audiences have a favourite, they’re keeping it close to the vest.

It was another full house for the second of two scheduled in-person Ward 5 all candidates debates last night (Oct. 12) at the Carp Agricultural Hall, but demographically it was a different group from those in Kinburn Oct. 5.

Just like Kinburn, attendees searched for chairs with more than 120 laid out in advance of the event, and several stood at the back of the room. It was a group that skewed younger than the first debate, with a couple young families in attendance. There were a few community advocates in the group that were spotted at the first debate as well, but for the most part, it was a totally different crowd at last night’s debate, perhaps a completely different demographic.

The Kinburn debate was hosted by the Ontario Federation of Agriculture and the West Carleton agriculture community made up the majority of the attendance. The Wednesday debate in Carp was hosted by the Huntley Community Association (HCA) and the audience definitely focused towards village, development and transportation issues as opposed to the industry concerns featured in Kinburn.

Last night was the last opportunity before the Oct. 24 election for Ward 5 residents to contrast and compare the six candidates in one spot. It was the candidates last opportunity to be on stage, with their competitors and show their mettle at answering questions on municipal matters in real time. Clarke Kelly, Greg Patacairk, Sasha Duguay, Stephanie Maghnam, Ian Madrill and Nagmani Sharma were in the spotlight together for the last time.

One thing both debates had in common is both crowds’ poker faces were on point. If there is a favourite candidate, it is impossible to tell from the reactions of the audience. In Kinburn, the audience only applauded after opening and closing statements. The six candidates didn’t even get that in Carp. The audience applauded all the candidates’ efforts once, at the end of the evening. Again, there were no cat calls or guffaws from the audience. No cheering for answers from candidates that pleased them.

“It’s our great pleasure to host this debate,” HCA director and debate moderator Allan Joyner told the hall. “I think this is one of the most valuable things we do as an organization. Tomorrow, this will all be gone, and they’ll be setting up an advance poll here.”

The questions for the evening were focused on the Carp community and the village. Ten minutes in to the debate development was an early theme.

In West Carleton, when it comes to public transit there are “some very divergent views,” Joyner said.

During the meeting Madrill, Patacairk, Duguay and Clarke were all opposed to providing public transit to the community through increased tax dollars in the form of removing West Carleton from its transit exemption status.

Nagmani was for a transit service and Maghnam said she was open to considering a service familiar with the work of the grassroots organization Rural Transit Solutions.

West Carleton Online asked the candidates about transit last week in question three of our ongoing series discussing issues with the candidates. You can find that series here.

Candidates were asked a variety of questions related to their qualifications for the position including their attendance at City Hall, their experience managing budgets and political affiliations.

They were asked how they would work with a new mayor and build consensus with 23 other councillors.

For the first time in years, the debate allowed questions from the floor, with four residents being selected on the raised hand system to ask a question.

As has been the case for the most part, the candidates were respectful of each other and avoided directly mentioning the competition during the debate. Until nearly the very end.

Patacairk, during his closing remarks, took the opportunity to publicly explain the city’s Agriculture and Rural Affairs committee to Duguay as well as publicly congratulate Dunrobin Women’s Institute members Beth McEwen, Jane Hillary and Pam Smith-Hladey as the ones behind the Dunrobin park upgrades at the four corners in reference to a statement candidate Maghnam’s made earlier.

Joyner ended the meeting a few minutes before 9 p.m. to allow those in attendance to speak to the candidates one-on-one.

One thought on “Carp debate a different crowd” 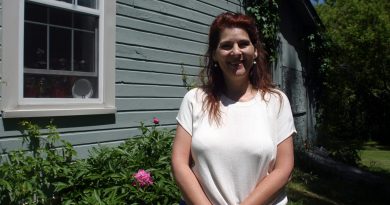