CARP – Canada’s best young fastball players will be spending next week (Aug. 2 to 7) in Carp and West Carleton Online spoke to Softball Canada to find out who’s who at the 2022 Alterna Savings U23 Men’s Canadian Fast Pitch Championship.

Seven teams from as far away as Newfoundland in the east and Saskatchewan in the west will be coming to Carp to battle for the U23 2022 championship.

Earlier this month the final qualifying tournaments were held and last week Softball Canada announced who would be competing in Carp.

Today (July 26), West Carleton Online spoke to Softball Canada’s marketing and communications manager Gilles LeBlanc to find out what teams and what players fans should be looking out for during the tournament.

“Pretty much all of the teams have former junior national team members on them,” LeBlanc said. “It should be a fantastic event and it’s great to have it back in Ottawa.”

Ten players in the tournament are current U23 men’s national team members.

While this is the first U23 fast pitch national championship since 2019, last fall Softball Canada held a Rawlings Grandslam tournament.

“It was not official,” LeBlanc said. “We wanted to scout for our national team. We wanted to get our athletes out and have a look at them.”

The Owen Sound Selects won that tournament and because of that LeBlanc says the Selects have to be considered the favourites going in to the tournament.

“I would say they’re the favourites, but there are some teams that will give them a challenge,” he said.

“Most of their starters,” LeBlanc said.

Torrie and Manion are “two of the top pitchers in Canada and both are on the same team. It’s going to be tough to score runs against the Selects,” LeBlanc said.

Tavistock will have five former U19 members and one current U23 player in the form of catcher, shortstop Mitch McKay.

“Tavistock has had a strong program the last five or six teams,” LeBlanc said. “They’re a great organization for sure.”

Newfoundland Physio and Co. lost to Owen Sound during the finals of last year’s grandslam tournament and will be looking at completing unfinished business next week in Carp.

Newfoundland will be led by slugging outfielder Jordan Pomeroy. He’s a former national junior team member and current U23 national team member and was also the MVP of the 2021 Rawlings Grandslam event and the 2021 International Softball Congress tournament MVP.

During the 2018 WBSC Junior Men’s World Softball Championship in Prince Albert, SK, Pomeroy drove in seven runs and scored four times for Canada in the team’s four wins including a grand-slam home run.

“He’s near the top if not the top when it comes to batting,” LeBlanc said. “He’s one to watch. They have a great program out there.”

Joining Pomeroy on the U23 team are shortstop Liam Shea and third baseman Mark Stack.

“They are always a tough team to play against,” LeBlanc said.

Rahn is a two-sport athlete who also plays in the Provincial Junior Hockey League for the Tavistock Braves.

Équipe Québec is the province’s Canada Games team and features one former U19 teammate in the form of catcher, shortstop Xavier Daneau.

“They’re a younger team, but bringing Canada Games experience with them,” LeBlanc said.

The tournament’s home team, the Ottawa Valley Chiefs, are based out of Greely and have been getting ready for the tournament by playing in the Greater Ottawa Fastball League (GOFL) this year. The team has a 5-9-1 record in the GOFL and will be facing a whole new class of competition at the U23 championship.

“It’s a step up,” LeBlanc said. “The key for them is to show they belong. The only way to get better is to play better teams. It will be interesting to see how they handle that exposure and if they can cause a few upsets.”

LeBlanc is excited to see the U23 national championship return to the Ottawa area. It’s been a decade since the women played in the area and even longer for the men.

“The Ottawa Valley is a great place to watch softball, so hopefully there will be lots of people out supporting them,” LeBlanc said. “The organizing committee seems to be doing a great job of things. It’s exciting. It’s a Canadian championship. There are a lot of good players and teams and we’re looking forward to it. The tournament will inspire some young players. Hosting tournaments like this always drums up excitement for the young players.”

NFU: Farmers’ right to seed is a matter of principle 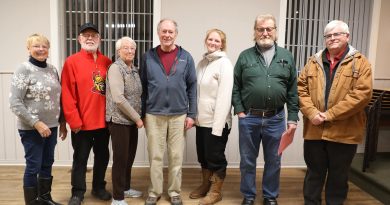 Galetta CA ushers in new board