CONSTANCE BAY – With almost 20 years of experience, it makes perfect sense for Constance Bay’s Phil Aldis to be the new boss of a business he has loved for two decades.

The same day (Sept. 22) laser tag company Laser Quest announced it was closing all 36 North American locations as a result of losses incurred during the COVID-19 pandemic, Aldis announced the opening of LaserMaxx Laser Tag at the former St. Laurent location of Laser Quest.

A former Laser Quest employee, Aldis got his start with Laser Quest Ottawa as the location’s general manager in the fall of 2001. He stayed with the company, moving up the ranks, working at many of the locations around North America, and finally holding the title of director of operations for North America, until the company announced layoffs in the summer of 2020, as the pandemic shuttered the business.

That experience and knowledge, plus his love of the business, sparked his desire to get in to business for himself.

“When I found out about the closure, I immediately reached out to the landlords,” Aldis said of the building that boasts a 10,000 square-foot play area. “I love what I’ve been doing for the last 20 years. Laser tag is still popular, it’s still very, very fun and it’s a landmark institution in Ottawa. When you have fun at work, it barely seems like work.”

Now that he’s the boss, Aldis is hard at work upgrading the place and installing COVID-19 friendly policies.

“We’re in the process of cleaning it up, sprucing it up, putting all the protocols in place and building a business from the ground up,” Aldis said.

Aldis says he’s not intimidated about opening a business in the midst of a pandemic and says laser tag is a game tailor-made for fun during this stressful time.

“My goal is to keep laser tag available to all of the people in the Ottawa area and provide a safe, socially distanced activity,” he said. “As long as were in Phase 3, we can be open. It’s a fluid situation, but as long as we follow all the guidelines and figure out a way to keep the customers and employees safe.”

With the laser equipment the business boasts, it is no problem for players to remain at a safe distance while playing.

“We’re driving home the message this is contactless,” Aldis said.

Aldis says the real issue is the instruction process when all the players are gathered in the same room to learn the rules and process of playing. LaserMaxx will limit the maximum number of players from 40 to 20 and instructions will be split in to two rooms to guarantee everyone can keep their difference.

The new arcade being installed will be spaced at six feet and involve constant cleaning.

Aldis says the goal is to open soon but these are uncertain times.

“We’re saying the end of October but we’re not sure with the fluid situation,” Aldis said. “The worst thing you can do is get someone excited about a birthday party and then have to reschedule it.”

Aldis says the new business will also have a Founders’ Club. For a pre-opening price of $100 a founder receives a 20 per cent lifetime discount on all laser tag packages as well as be eligible to participate in exclusive VIP nights for founders.

In November, 2019, we interviewed Aldis’ daughter Mackenzie Aldis about her business KenzGear and BayLife clothing and accessories. Read that story here. 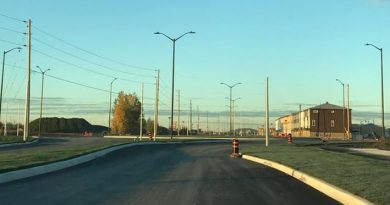 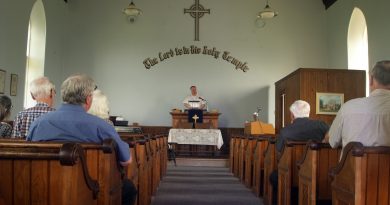