RENFREW COUNTY – The Renfrew Detachment of the Ontario Provincial Police (OPP) reminds the public if you are in an abusive home during the pandemic there is help after a busy week including nine domestic disputes between April 20 and 26.

During that week the OPP investigated 178 calls for service.

“If you or someone you know is living in or involved in an abusive relationship help is available,” Const. Tina Hunt released in a statement today (April 28). “Contact Bernadette McCann House 24/7 for support, advice or the safety of a shelter at 1-800-267-4930. The Women’s Sexual Assault Centre of Renfrew County is also available 24/7 for information and support at 1-800-663-3060. You could also attend the emergency department of any hospital in Renfrew County and ask to speak to a member of the Assault Response Team. Victim Services of Renfrew County is also available to provide emotional and practical assistance to people who have experienced domestic violence. They can be reached at 613-649-2852 or toll free at 1-877-568-5730. In emergencies call 911.”

On April 23 officers with the Renfrew OPP Detachment responded to a family dispute in McNab-Braeside Township.

“As a result of an investigation, Lisa Campbell, 45-years-old of McNab-Braeside, has been charged with failure to comply with an undertaking, possession of a schedule one substance believed to be cocaine and two counts of fail to appear,” Hunt said. “The accused was held for a bail hearing.”

On April 20, constables with the Renfrew OPP Detachment responded to a traffic complaint on Edey Street in the Town of Arnprior.

“A vehicle was reported to be driving over lawns in the area,” Hunt said. “The vehicle was located at a local business and as a result of the investigation, Samuel Wright, 19-years-old of Arnprior, has been charged with impaired driving, obstruct peace officer, take motor vehicle without consent and fail to stop after accident. The accused was released on an undertaking to attend the Ontario Court of Justice in Renfrew on July 22.”

On April 21, an officer with the Renfrew OPP Detachment was conducting traffic enforcement on Highway 17 in the Town of Arnprior.

“A traffic stop was initiated and as a result of the investigation, Anthony Richardson, 51-years-old of Ottawa, has been charged with impaired driving, and failure or refusal to comply with demand. The accused was released on an undertaking to attend at the Ontario Court of Justice in Renfrew on June 17.”

On April 21, officers with the Renfrew OPP responded to fraud call at a bank in the Town of Arnprior.

“A fraudulent driver’s license was presented at the location and was reported to police,” Hunt said. “As a result of an investigation Gordon Paris, 47-years-old, has been charged with fail to appear/comply with appearance notice, personation with intent, obstruct peace officer and two counts of identity theft. The accused was released on an Undertaking to attend at the Ontario Court of Justice in Renfrew on June 17.”

Crime Stoppers Pembroke/Renfrew County believes that someone may have information that could assist police in solving these crimes.

“If you have information that results in charges being laid, you qualify for an award of up to $2,000,” Hunt said. “Call Pembroke/Renfrew County Crime Stoppers at 613-735-8477 or toll free at 1-800-222-8477. You could help solve a crime. All tips remain anonymous and you will not have to attend court. Crime Stoppers does not subscribe to call display. The telephones are answered 24 hours a day.  Please visit the website www.valleytips.ca.” 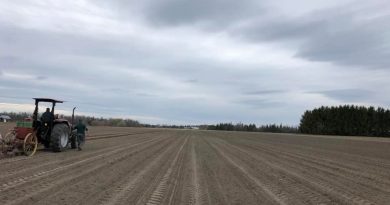 Hudson’s Sweet Corn in the ground

Willow: It must be the hair