“Congratulations to Jordan Ricketts who is the recipient of this year’s $1,000 Student Bursary Award,” AGH communications lead Jane Adams released in a statement today (July 8). “Each year, the Fairview Manor Auxiliary and the Almonte General Hospital volunteer team award a deserving Student Volunteer with a Bursary.”

Jordan has volunteered at AGH and Fairview Manor for the past four years. She completed more than 120 hours of service, including three summers with the AGH Junior Volunteer program, as well as assisting the Fairview Manor Recreation team in the evenings during the school year. Jordan is also very active in her community and school.

“Undoubtedly, the passions and relationships I have developed in my time volunteering throughout the hospital and Fairview Manor have immensely shaped me to possess the drive that I have within myself today,” Jordan wrote in her submission.

Jordan graduated this year from Carleton Place High School as Valedictorian of her class. She has been accepted to the Bachelor of Science Psychology Honours Program at Carleton University where she will be focusing on the study of health psychology. Jordan plans to pursue further post-secondary education by attending medical school to pursue a career in geriatric psychiatry. 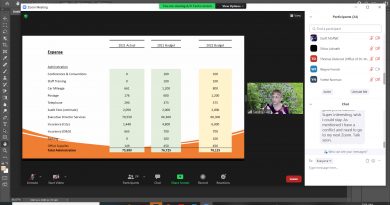 CRCBIA to focus on water, transit in 2022