SMITH FALLS – Take some time this month for yourself and disappear.

West Carleton Online has five pairs of tickets to give away to the world-class magic show OUTERBRIDGE – Clockwork Mysteries which plays every Saturday evening throughout the Summer at The Station Theatre in Smith Falls.

Critics across the globe have hailed Ottawa Valley residents Ted and Marion Outerbridge as “a master of Illusion” (CBC-Radio Canada), “champions of magic” (Bergedorfer Zeitung, Hamburg, Germany), and described their performance as “a visual feast” (Jinhua Daily, China), and exclaimed “WOW, that was fantastic… BRAVO!” (Global TV).

It is the most successful illusion show in Canada, and it wouldn’t be an over-statement to say that OUTERBRIDGE is Canada’s reply to America’s Copperfield, having received both the Award of Excellence from Ontario Contact, the Touring Artist of the Year award from the British Columbia Touring Council, and setting box office records, one of which generated a call to a Fire Marshall to get permission to expand seating.

After years of performing around the world, including Europe, China and the famous Magic Castle in Hollywood, the Outerbridges have recently relocated to Smiths Falls, and are delighted to be performing minutes from their new home in the Ottawa Valley.

“Years ago doing a theatrical show comparable to something in Las Vegas, in a town of 9,000 would not have been possible, but TV shows like America’s Got Talent have created a renaissance in the magical arts,” Ted Outerbridge said.

Outerbridge has done everything from consulting for Cirque du Soleil, creating magic for movies, to making more than 100 television appearances, including CTV, Much Music, Global, The Discovery Channel’s Mystery Hunters, and his own TV special Magic with Ted Outerbridge.

Just as magic is experiencing a renaissance, tourism in Smiths Falls has been growing, mostly due to the interest in medical cannabis and cannabis tourism fueled by Tweed headquarters. OUTERBRIDGE – Clockwork Mysteries provides a rare opportunity for residents and visitors alike to see a performance in this economic and cultural hub.

Within seconds of taking the stage, the Outerbridges fuse their revolutionary illusions with split-second artistry to hold viewers spellbound. A fantastical event that is at once magic, dance, theatre, and a dash of wonder, the audience is invited into a mysterious clock tower equipped with a variety of timekeeping devices. With the help of an elaborate Victorian time machine, the performers and spectators become part of a race against time. They experience time accelerating and slowing down and participate in predicting the contents of a time capsule.

Keeping their audience enthralled from the first astonishing illusion to the spectacular finale, the Outerbridges create an experience that far exceeds the expectations of every spectator. Indeed, in one of Ted’s illusions, he vanishes from the stage, appearing instantaneously in the audience and completely surprising them. One evening, he completely surprised an audience member by this illusion.

“Someone was upset because I was blocking their view of the show”, Ted recalls. “They were yelling and hit me to get out of the way. Then they realized it was me. I wasn’t injured, I was amused.”

The Station Theatre is bringing the world-class magic show OUTERBRIDGE – Clockwork Mysteries  to Smiths Falls on Saturday evenings this summer at 7:30 p.m. – July 27, Aug. 3, 24 and 31. Tickets are $⁠1⁠5⁠⁠ or ⁠⁠$⁠3⁠0 and can be ordered at 6⁠1⁠3⁠-2⁠8⁠3⁠-⁠0⁠30⁠0⁠⁠, ⁠⁠www.smithsfallstheatre.com/other-attractions , or in-person at Special Greetings, 8 Russell St E.

But by reading this story, you can win to get in. West Carleton Online has five pairs of tickets to give away to West Carleton magic lovers and all you have to do to claim them is be one of the first five people to email us at westcarletononline@gmail.com with the secret password – ‘hocus pocus.’ 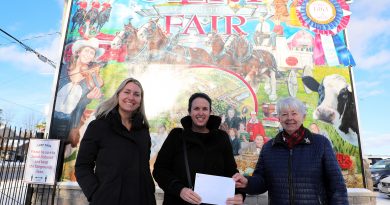