WEST CARLETON – When it comes to municipal politics and Ward 5, transit is a polarizing issue.

Many in West Carleton believe the rural lifestyle involves being responsible for your own transportation and are quite happy, in fact insist up on it, with the tax savings of being excluded from the transit tax levy. Ward 5 is the only ward in the city to enjoy that exclusion. The last few municipal elections have seen a growing movement of Ward 5 residents who believe public transit service is needed in the ward. Rural Transit Solutions is a grassroots organization focused on the issue, identifying a need for public transit for youth and seniors in the community. They recently (May 5) approached the Agriculture and Rural Affairs committee with their idea on the subject.

Many of our rural roads are in desperate need of repair – not only do we need to repair and resurface the roads, but we also need to address the crumbling shoulders that are a definite hazard, particularly to farm vehicles.

I will work closely with my rural colleagues around the City Hall table to address common problems across Ottawa.

There are many rural roads in surrounding counties that are in much better condition than those in the city. The city is obviously not devoting enough resources to our roads.

When it comes to public transit options, after knocking on several thousand doors, most people are content they do not receive the service because they are also not paying for it (except for ParaTranspo). Many residents are concerned if there was a proposed transit solution for West Carleton-March, they do not want to pay for a service they are not going to use.

I do not support the proposal for free transit across Ottawa.

Transit has never really been an option here, and I think most people accept that as part of the rural lifestyle.

However, I would be interested in exploring transportation options for people in our rural community who, for whatever reason, do not have access to a car or are unable to drive. There are many people who have spent their lives in West Carleton who do not want to leave but someday may find themselves unable to drive.

As someone with an aging father I would like to ensure there are options for seniors or others who may require assistance getting to appointments etc. Having individual bus routes that cut across long, sparsely populated roads is an unlikely solution.

Council should consider hubs, rural express connections, and minibus shuttle runs as a means of bringing public transportation west, without investing a large amount up front. This should be funded primarily by user fees to avoid increasing costs for many that will not use the service.

Regardless, I think public consultation and community engagement is essential to figure out what residents of West Carleton-March truly want and need from their city.

Ward 5 is considered on the city’s Transportation Master Plan as Area Transit B meaning we don’t pay a transit levy.

We pay for Para-Transpo and for the Park-and-Ride, which is less than $100 a year for the rural area.

We are a growing community; our businesses and agricultural lands are one of the largest economic drivers in our city. Ensuring people get in and out of our community is a priority.

I attended the Western Ottawa Community Resource Centre consultation for Ward 5 residents, on Sept. 28. The discussions identified many ways a new council can support residents in rural areas, including transit options.

Furthermore, I was present at the city’s Agriculture and Rural Affairs committee meeting on Sept. 28 (see first link in story) in which Rural Transit Solutions was a delegate and presented a report, which will be sent to the Transportation committee for consideration.

Having built businesses in vulnerable sector transportation, I know firsthand how important it is for residents to have transit solutions. I’ve attended many public and business consultations on this file. I am committed to working with our provincial partners and rural councillors in supporting realistic, sustainable transportation options to help our rural residents.

I believe rural ward access to transportation (public/OC Transpo ) is something most residents understand is not going to be available to them.

In Ward 5, 800 square kilometers, the ability for the city to provide reliable, fair, and most of all convenient solution is not something that can be done.

Our city struggles with delivering this service in highly urbanized areas today, so applying some form in a rural setting would be a frustrating task. I understand the need for a portion of our residents to have access to some form of transportation and I would be in consideration of a “pay as you go” proposal but with the caveat I will not back a proposal that introduces a new transpo tax to the wider population in West Carleton-March.

Most residents I have spoken to do not have an appetite to increase their taxes with a transpo levy tax. For the most part there is an understanding of rural residents of service expectations when it comes to public transportation.

The principal role of transport is to provide or improve access to different locations for individuals and businesses.

Transportation thus facilitates a wider range of social and economic interactions than would otherwise be possible. Also, transportation is an important sector of the economy in its own right. Our ward needs to grow in businesses as well as for everyone. Local employers are looking for employees, and university or college students in our area are looking for bus services to continue to attend classes.

In our ward, most people have vehicles, but not every single person. We do not want to think about the transit system because of just one fear of getting added extra tax.

In Carp and Dubrobin area we already have a bus running on Wednesdays.

To improve the service, without impacting current tax, as a councillor I would like to modify the existing bus services from Monday to Friday mornings and evenings rather than keeping just Wednesday which doesn’t help much.

Also, to connect our other communities and neighborhood I would like to add an eight to 10-seater shuttle service running every hour starting from community local to drop off and pick up passengers to Park and Ride locations in Kanata and Stittsville. Passengers will have to pay subsidized rates provided by the city.

It is clear from my visits to many at the door the vast majority of West Carleton-March residents still feel the same way about transit as they have in previous years.

By living in West Carleton-March we have chosen a lifestyle that includes the use of a car. To sprawl the transit service further into our ward is expensive and underutilized already today.

So, it is my firm conviction we should stay with the current model of service delivery to West Carleton. The future model I believe might work could include a hybrid approach for some people who commute into Ottawa where they drive (or we innovate with the use of driverless shuttles in the further future) into park and ride locations where they will eventually jump into a well functioning higher speed transit network which would get them across town quickly – but I am realistic in understanding we have several years of infrastructure work until that becomes something that would be workable for more West Carleton-March residents. That is a future I am prepared to work for.

To see all questions posed to the candidates in our series, click here. 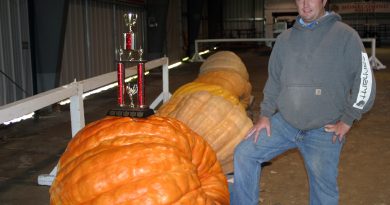