St. Pius X opened the scoring in the first half, but West battled back and early in the second half scored the equalizer.

The draw gives the junior soccer team a 2-0-4 record and an undefeated season so far.

WCSS has wins over Omer-Deslauriers (4-1) and Earl of March (5-2). Its other ties come against Nepean, Merivale and All Saints.

The season wraps up Monday (Oct. 31) and playoffs start Nov. 3. While the Wolves have made the playoffs, matches won’t be determined until the end of the regular season.

The senior boys haven’t had as strong a season as their junior counterparts.

The Wolves have a 1-2-3 record and sit in fifth in the NCSSAA West Tier 1 division.

The Wolves started the season strong with a draw on Sept. 28 against Maurice Lapointe and then beating Bell High School 1-0 on Oct. 4.

The Wolves would tie their next two games before dropping their last two games of the season.

The fifth-place finish in the eight-team division means the Wolves did not qualify for the playoffs.

The Wolves senior girls basketball sit in fifth place in the NCSSAA West 2 division with a 2-4-0 record.

The junior girls basketball team sits second in the Tier 1 west division with a 5-2-0 record.

The Wolves will host their first playoff game on Monday (Oct. 31) in a rematch against Sir Robert Borden at 4 p.m.

The Wolves senior boys volleyball team finished in third place in the NCSSAA West 1 division with a 4-2-0 record.

The Wolves have beat Pierre-Savard, AY Jackson, Earl of March and St. Pius.

In its first playoff series the Wolves fell three games to two to John McRae on Oct. 24 before losing three games straight to Glebe Collegiate Institute on Oct. 26.

The Wolves sit first in the NCSSAA league this fall with an undefeated record of three wins.

The Wolves finished a successful tournament Oct. 25 beating up on Bell High School 6-0, Woodroffe 7-3 and Nepean 4-2.

There are 18 teams in the league. 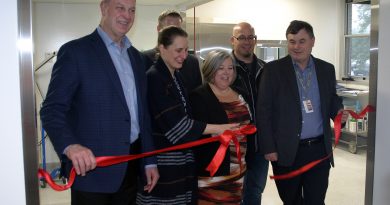