ARNPRIOR – Last Saturday (Feb. 19), the West Carleton Rivermen scored the most goals in one game the Eastern Ontario Super Hockey League (EOSHL) has seen in its two-season history.

In front of the home team’s largest crowd this season (78 paying adults and a whole bunch of kids), the Rivermen (11-5-1) pumped 15 goals past the EOSHL West basement-dwelling Frontenac Phantoms (3-12-1) in a high-scoring 15-6 win at the Bert Hall Arena in Arnprior.

The Rivermen fired 63 shots at Phantom goalie Jay Tuck who ended the tough afternoon with a .762 save percentage.

“Definitely nice to put up the offence we did on Saturday, especially considering how there have been times during the season where we have struggled offensively,” Rivermen coach Mike Byrne told West Carleton Online on Family Day (Feb. 21). “It was a complete team effort; I believe we had 13 players who had multi point games.”

Moyes does double-duty for the team handling all the off-ice commitments and bill paying before stepping on the ice to play the game he loves. Moyes played semi-pro hockey for the Salzgitter Icefighters in Germany’s Oberliga during the 2010-2011 season, before stops in the Federal Hockey League and the Ligue de Hockey Senior A de l’Outaouais before becoming a team owner in the EOSHL’s inaugural 2019-2020 season.

Moyes has nine goals and nine assists in 17 league games this season.

While the first round of the playoffs is set in the EOSHL West Division, the Rivermen are still in a battle for the right to start the playoffs at home with their first-round match-up, the Tweed Oil Kings (11-4-0).

The win keeps the Rivermen in second in the six-team west with a one-point lead over the Oil Kings. But the Oil Kings have two games in hand, so even if the Rivermen win their last game of the season, a 12:20 p.m. start at the Nick Smith Centre next Saturday (Feb.26), that does not guarantee them the home-team playoff advantage.

The Oil Kings have two games in hand and have the chance to tie the division-leading Smith Falls Rideaus (14-3-0) but the tie-breaker would still go to the Rideaus who have officially won the EOSHL West Division.

The Rivermen split their regular season games with the Oil Kings winning 5-2 on Feb. 5 and losing in Tweed 8-5 on Nov. 21, 2021. Whether the Rivermen are on the road or at home for the first round of the playoffs, Byrne says the team has its work cut out for them against a team that has not lost at home this season.

“The Oil Kings are good skating, physical team,” he said. “They also have not lost a game at home. In saying that, our guys need to take the intensity up a notch. The first series is a best of three, meaning we cannot afford to take a single period off. I’m expecting a very competitive series, and I am preparing for them to give us all we can handle.”

The Rivermen end their regular season Saturday, Feb. 26 at the Nick Smith Centre against the fourth EOSHL West Division playoff team the Gananoque Islanders (8-7-2). A win is the team’s best chance to host the EOSHL playoffs’ opening night.

Tickets are $10, seniors are $8 and youth under 18 are free with an accompanying adult. Tickets available at the gate. 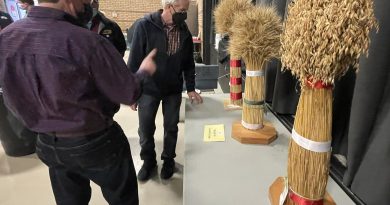