WEST CARLETON – West Carleton’s Ottawa Carleton District School Board (OCDSB) trustee Lynn Scott is also chair of the board and she wants to see a full return to class this coming September.

Chair Scott is the trustee for Zone 1 which includes public schools in West Carleton, Kanata, Stittsville, and Rideau-Goulbourn. On Friday (July 10) the OCDSB voted unanimously to recommend all board students return to a ‘regular’ five-day school week for the 2020-2021 school year. Yesterday (July 13), Scott spoke with West Carleton Online about that decision.

“I could use a big dose of certainty on anything from the provincial government,” Scott told West Carleton Online.

Currently school boards are required to have three plans ready to go for the fast-approaching start on the new school year – one, a full return to school; two, a hybrid model that will see a partial, part-time return to school; and three, a return to online education.

Scott, who has been a board member for 26 years, is hoping for option number one.

“Certainly, that would be our preference and we wanted to make that clear,” Scott said of Friday’s announcement.

The announcement came after OCDSB trustees participated in a meeting that started Thursday (July 9) and stretched in to the early hours of Friday. The announcement came on the same day Ottawa Public Health’s chief medical officer Dr. Vera Etches also released a statement urging the province for a full return to school this fall.

Scott feels, there are just too many negatives to the other options the board is also planning for.

She says the hybrid option, which would combine in-class and online education “has a lot of parents upset.”

“If we have to start the year with the hybrid option, the hope is to transform into the full-time model at some point during the school year,” Scott said.

If, due to health concerns, the school year starts at home, Scott says there’s still lots of work to do.

“We know very well some students fell through the cracks,” Scott said about last year’s taste of online education. “We have to work double-hard to make sure those kids can catch up. How can we improve our online learning if we have to return to that?”

Despite the early ‘end’ to the school year, Scott says the offseason has been the busiest summer she has faced as a trustee “and it’s going to continue.”

Next week, alongside continued work on three separate plans for a return to school in the fall, the trustees will be working on next year’s budget and “the costs associated with the various plans,” she said.

“And we’ll have to continue to meet as the plans get refined,” Scott said. “There’s still a lot of work to do to make sure schools are safe places for children to return to. Our staff have ongoing meetings with public health and the other school boards. Our plan has to be in-line with the Catholic board’s plan, and to some extent, the plan the French boards adopt. It’s been an exercise in collaboration.”

Scott says the board is usually finished with school year preparation meetings by the end of June.

Scott says one of the reasons for making their request for a full-time school year public, is to ensure resources are available to make school safe for students, staff and parents.

Even if there is a full return, Scott says the board will still have to have an online option.

“Some families won’t feel comfortable returning to school,” Scott said. “No matter what, we’ll have to have some form of online education. There are still so many different things to consider and decide.”

A ‘normal’ school year still has lots of questions too.

“How are going to manage to have smaller classrooms and less migration around the school during the day?” Scott said. “Full time won’t look the same as it did last September. We want to ensure the province includes that funding in next year’s budget.”

Scott says there will be additional costs such as personal protection equipment, additional staff, extra cleaning and extra technology.

“That is going to need additional funding to deal with the current environment of education,” Scott said.

Scott says the board will be mailing a letter to the Ministry of Education some time this week with that request.

Last year, the school year ended suddenly and with not much warning due to the COVID-19 pandemic. While schools closed, educators scrambled to continue providing education to students at home and it was a challenge for everyone involved.

“We’re very concerned about the health and welfare of the students,” Scott said. “There is going to be some learning loss, there is every summer. This year it’s going to be more than usual.”

There’s the parents’ side to consider as well.

“We have a ton of parents that have to go to work,” Scott said. “We’ve heard from so many that are at their wits’ end trying to balance work and parenting. We hear from a lot that say they are not teachers and they’re absolutely right. They are not teachers.”

So, the government needs to consider the economic impacts of their return to school model as well as other issues.

“We also have to worry about the mental health of our families as well,” Scott said. “Parents are finding it very, very difficult. We have to look at all the things that happened, so we are prepared for September.”

Although the end of the school year and start of online education last March did teach the board some lessons.

“One thing it did is certainly show the huge resiliency people have,” Scott said. “It spurred a lot of innovation, not just from educators, but the parents and students as well.”

The province is expected to decide early next month on a model for returning to school. 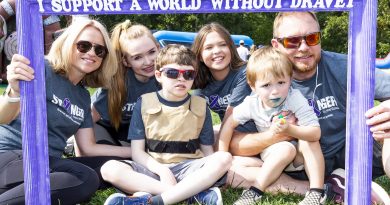