WEST CARLETON – In an editorial in this week’s West Carleton Your Community Voice, publisher Michael Wollock says this week’s (Dec. 10) edition of the bi-monthly newspaper will be its last for the foreseeable future.

The publisher says it is the result of the COVID-19 global pandemic.

“Along with all the retail stores, community groups, and even the churches, everyone has been suffering financially including Your Community Voice during these difficult times,” Wollock wrote in the newspaper’s editorial section. “Our advertising has been considerably reduced, while our costs for printing and post office delivery have been increasing. You might have noticed we have been printing only 12 pages for most of our editions since the summer. The revenue from these small papers cannot sustain the costs of publishing a community newspaper.”

Wollock refers to the halt in publishing as a “break,” but does not give a firm date when publishing might resume.

“I am sorry to inform you that for the next few month we will postpone publishing,” Wollock said.

The Community Voice’s other two publications in Kanata and Stittsville will continue. The newspaper started publishing in the community less than two years ago.

The Carp Review, one of the earliest papers to cover the West Carleton area, produced 946 issues between 1905 and 1930.

City sets road safety priorities for the next year 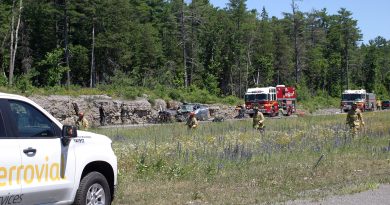