The WCARC was formed in the early 1970s and made up of people who have a love of HF, VHF, UHF and other forms of radio operation.

Perhaps surprisingly, there are a variety of competitions radio clubs take part in, and on the June 11 weekend the WCARC was battling thousands of clubs across North America to reach out to as many different clubs and radio operators as they could in the allotted time period.

“Some operators want proof of all the countries they’ve spoken to,” club member Glenn MacDonell told West Carleton Online during a break in the action. “Some like to go to difficult areas to communicate from. Those are called summits.”

For the ARRL event, clubs or operators, have to set up in a place that doesn’t have electricity or infrastructure, set up an antenna, and attempt to contact as many other clubs and operators, in as many different areas across North America as they can in the competition period.

“It’s partly for the clubs to get together, “MacDonell said. “It’s partly to encourage people to be able to set up in an emergency.”

And its mostly for fun.

The ARRL competition has been held for roughly the last 15 years not including the years during the pandemic.

The WCARC used to head to a field near Lake Ontario to set up. Eight years ago they looked for a local spot. The club has used the Corkery Community Centre in the past and is setting up in Kinburn in 2022.

“In a nutshell, members of the club are setting up a temporary Ham radio station and will be trying to make contacts with other radio amateurs in the area,” member Charles MacDonald said. “The change is that we will be using VHF frequencies, which
is in radio bands near those used for television transmissions. Frequencies that are mostly used for line-of-sight communications. To
do this we will be using various methods of communicating.”

Past president Clayton Smith says there are about 74,000 amateur clubs around North America, and Smith expects about 10 to 15 per cent of those clubs, as well as some individual operators will be participating. The WCARC is the only Ottawa area club participating in the ARRL.

The world is divided up in to two by one-degree blocks forming a grid around the globe.

“You get points based on how many of those grid squares you contact,” Smith said. “You get more points for contacting grid squares all over than you would if you contacted 100 people from Ottawa.”

Part of the fun for operators, is building their one equipment from surplus.

“A lot of people make their own High Frequency antennas,” Smith said.

“The farthest distance we communicated with it was 11 kilometres,” Zauhar said.

The challenge of the competition is atmospheric changes have a big affect on very high frequencies.

“During an event like this, conditions change,” Smith said. “Last night, things were hopping. Today they are not as good and we’re taking whatever scraps we can get. Change can happen at any time, and it all depends on what’s going on in the upper atmosphere.”

Those one-by-two-degree grids work out to an area of about 100 km by 90 km. The grid Kinburn and most of West Carleton is in is known as FN15vj. That grid goes from roughly Carleton Place to the Laurentian Hills.

“Normally your signal is affected by the horizon,” Smith said. “Sometimes you can skip it farther and June is the best month for that, so that’s why we’re doing this in June.”

The club meets monthly and participates in a few events each year. Currently there are about 25 active members and most of them are participating in the event at various times throughout the weekend.

“This is the big one,” MacDonell said.

While the competition wrapped up last Monday (June 13), results for this year’s ARRL competition won’t be known for a while as competition judges verify scores and methods. 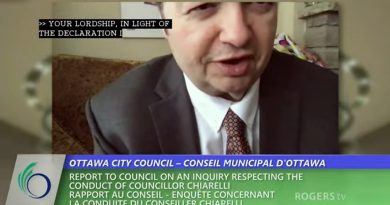 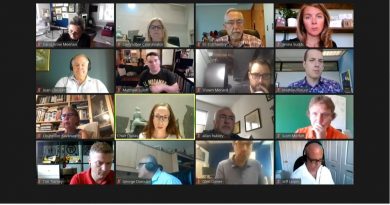