OTTAWA – The Transit Commission was advised that OC Transpo customers have been successfully transitioning to wearing cloth masks, as several health and safety measures were introduced on June 15 to help keep everyone as safe as possible before the return to full transit service on June 28.

OC Transpo was the first public transit agency in Canada to implement a new mandatory mask policy as a result of the COVID-19 pandemic.

The commission received an O-Train Line 1 operational update. Rideau Transit Group (RTG) provided the city with a plan that prioritizes technical improvements closely linked to performance. During this period of low ridership caused by the COVID-19 pandemic, Line 1 has undergone several temporary closures to allow RTG an opportunity to undertake work relating to issues that have impacted service. As RTG executes the work associated with their plan and identifies additional technical enhancements, there may be a need for future temporary closures to Line 1 during the summer months in addition to the upcoming shutdown from June 21 to 24.

Several Finance Services Department reports were presented today, including the 2020 Operating and Capital Budget Q1 Transit Commission Status Report, which indicated the first quarter of the year ended with a deficit of $8 million. The budget shortfall was due to several factors, including:

Augmented S1 bus service that was introduced in early January when RTG was unable to provide a reliable train service between Tunney’s Pasture Station, Hurdman Station, Blair Station and downtown.

Lower fare revenue due primarily to the reduced number of single-ride fares paid by customers starting mid-March, as a result of the COVID-19 pandemic. 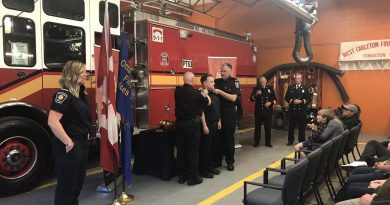 Third time not the charm for convenience store robber