WEST CARLETON – The tornado has come and gone. The news cycle has moved on. But the huge job of rebuilding a community is just getting to the brass tacks.

With a job so big, organization is a key component of rebuilding. The tornado touched down just under a month ago and volunteer coordinator, Dunrobin Community Association President, and newly appointed co-chair of the newly-created West Carleton Disaster Relief (WCDR) Greg Patacairk says “people need help now. That’s what’s important.”

The kind of help needed is rapidly changing and rapidly evolving.

So, the Dunrobin Disaster Relief has evolved as well, expanding in both numbers and scope. Disaster relief efforts have shifted to the newly formed WCDR, a name that better reflects the scope of those affected. The WCDR board is made up of representatives of five West Carleton community association board members and is also co-chaired by Kinburn Community Association President Alex Lesnick.

The WCDF already made a huge funding announcement yesterday.

“I knew this was going to go on for much, much longer and needed many more people,” Patacairk said. “It was clear Alex needed to be directly involved. These people are well versed in leading the community and we know those in Constance Bay know directly about dealing with disaster. These are the best of the best.”

Last week there was an update for tornado victims held in the form of a public meeting in Kinburn. While several issues were broached, many in attendance raised dissatisfaction with the Red Cross and some insurance providers.

“People are angry, they’re upset, they’re disillusioned. They’ve come out of the shock process and are coming to the reality they are not getting in to their house any time soon and have some real problems ahead of them,” Patacairk told West Carleton Online Oct. 17, while returning from an appointment to get an estimate on the hail damage his truck received during the storm.

Patacairk said there was a real sentiment in the crowd for the Red Cross to explain their assistance practices.

“There was significant discontent with the Red Cross,” he said. “Up to this point, the Red Cross announced it would provide $600 to affected homeowners that had no insurance. That worked out to $1,800 in Dunrobin. “We understand the Red Cross has fundraised about $1 million. To date it has been difficult to see where the funds have been allocated, other than the earlier announcement of $600 to $800 dollars for those who are uninsured. The United Way, Sens Foundation and other organizations have committed funds to food banks and mental health. We (the WCDR) are working with these organizations to better understand how funds are being allocated and to express the concerns and perceptions of the community.”

Patacairk says he and other volunteers have also heard of several insurance-related issues.

“As near as I know, as of a week ago, I have heard some insurance companies have been slow to come to the table and help out,” he said. “We’re hearing stories of people having to pay their own hotel bills. That’s $200 a day and they’re told they will be reimbursed later. We’ve heard stories some insurance companies just secured people’s stuff in the basement of their tornado-affected homes. There’s a very high-water table. That’s not sufficient.”

On the insurance front, Patacairk says the WCDR have shared concerns with the Insurance Bureau of Canada. He says they have no regulatory powers over insurance brokers but do have “significant influence.”

“They’ve been extremely helpful,” he said. “I though the more amicable we were, the less animosity there will be. Most have come back and said we want to fix this and fix it as soon as possible. But these people need help now. We know they’re crunching numbers, but we need to help people now.”

The Emergency Relief Centre, which had moved to the Dunrobin Community Centre, closed last Saturday. Patacairk says they will try to serve people remotely. To that end, WCDR has set up a brand new website with lots of contact and resource information.

The WCDR is also spending these days getting organized and efficient.

“A whole bunch of buckets are being created right now,” Patacairk said. “Large wooded lots need to be cleared. There is a laundry list of directors needed. We are trying to make smaller, task-specific groups such as outreach, lot clearing, communications, community contacts etc. We are doing closer observations. That’s where we’re at.”

But visible progress is being made.

“There are lots of good things happening in the background,” Patacairk said. “We’re in this for the long-haul. This organization will be together for at least a year-and-a-half.”

Patacairk asks those interested in donating money, do so through the Dunrobin Community Association.

“This is where it started,” he said. “It’s a not-for-profit organization with bookkeeping and that money will go directly in to the hands of those who need it. All of it is overseen by the WCDR.”

Tomorrow Eagle Creek Golf Club is hosting the #DunrobinStrong golf tournament from 11 a.m. to 8 p.m. Everyone is invited out to the barbecue starting at 5 p.m.

For more information on the WCDR, visit their new website here. 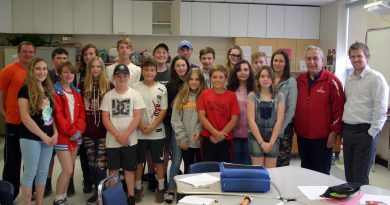 A thanks to St. Michael sandbaggers