KILMAURS – It was a door’s open service at St. Andrew’s Presbyterian Church in Kilmaurs Sunday (Aug. 5) – not only because of the ridiculous heatwave West Carleton finds itself embroiled in, but also so the tiny, one-room church could welcome the public and raise much needed funds for the historic Torbolton Cemetery.

Each year on the Eleventh Sunday after Pentecost, the heritage-designate, rural church, located on the dirt Kilmaurs Side Road, hosts a Torbolton Cemetery Memorial Service to raise funds for the upkeep of the cemetery.

Minister Christian Brydges says the historic cemetery needs regular maintenance and lawnmowing and this year a few trees are down that also need removing.

Presbyterian settlers of Kilmaurs built a small church in 1841 in nearby Dirlelton. In 1886 the community built a new stone church on donated land (where it currently sits) in Kilmaurs. The builders were able to repurpose stone quarried from McTiernan’s pit. The stone was originally designated for the Chats Georgian Bay Canal project of 1845 that would use the Ottawa River as a steamship conduit between Ottawa and the Great Lakes. The project was abandoned, and St. Andrew’s was the beneficiary.

The nearby Torbolton Cemetery is home to many of those early settlers as well as more recent area residents. The first internment dates back to 1852.

“I was up at the cemetery last week with my family to walk around and connect,” Brydges told the congregation. “It’s and act of remembrance and an act of community and we’re glad you are here with us today.”

Brydges spoke to West Carleton Online before the service to talk about more recent history at the church.

Brydges says this service dates back “forever” but it has only been a recent change the church has had a full-time Sunday minister. As the congregation shrank over the last few years, there have only been services “a couple of Sundays a month.”

Brydges is happy to be back every Sunday now.

“It’s been fantastic,” the Fitzroy Harbour native said. “I grew up at St. Andrew’s. I’m the organist as well as the preacher, so I get to pick all the music too.”

As the church is not heated, services are suspended in the winter.

“We’re closed the second week in December until April,” Brydges said. “As soon as we can shovel the front door out and you can sit here without your coat, we’re on.”

Brydges says now that there is a full-time service the congregation is slowly building.

“We have faithful regulars,” he said. “We’re slowly gaining some consistence.”

Brydges says there’s about 20 “regulars” that come out each Sunday. During the service, Brydges spoke about remembering the families buried in the community.

“We have to re-tell our stories because they can fade in our memories,” he preached. “We remember those who have gone on before us, sometimes far too soon. In the end, we all want to be remembered.” 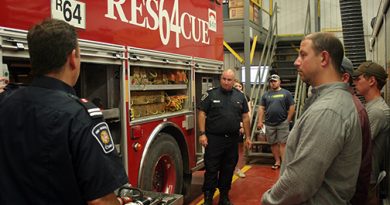 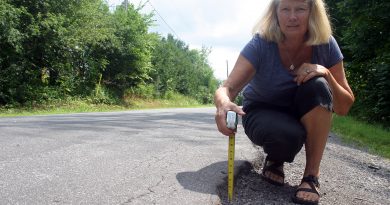