FITZROY HARBOUR – Rev. Jack Lougheed sits in his favourite chair in his Kedey Street home looking out a large picture window with a great view of the Ottawa River and Kedey Island. He and his recently deceased wife Mary Baird Lougheed (1925 to 2019) lived in the home together for 31 years and raised their family there.

Mary lived there practically her whole life. It was her parents’ home too. And her grandparents’.

Mary was a lover of local history, art and writing. She loved her community and loved writing about it.

In her 92nd year she started writing about the history of her community, family and village in a book that also includes her own artwork. She called that book Along the Grand: From Constance Bay to Fitzroy Harbour.

‘I am in my 92nd year, and Jack in his 93rd year. We are looking out our living room window of the house that my grandfather, Heman Kedey, had built over 100 years ago. Across the river and looking through the trees on Kedey Island, to where the timber slide was, I can see glimmers of white that would have been the Chats Falls. I remember when I was a young child, hearing the roar of the falls, lulling me to sleep at night, the sound that over 400 years ago, Champlain described as “wonderful noise,’” Mary’s story begins.

“She never finished it,” Jack told West Carleton Online from his home last week (Nov. 12) in that very same living room. “She worked on it for years. She kept working on it in her dreams. She was scattered and she was slipping.”

Early morning on May 29, Mary passed away at the Arnprior and District Memorial Hospital.

It took the combined effort of Jack and Mary’s children, a family of ministers, historians, writers and publishers, to finish the 64-page book.

“It’s heart-warming to see it finished,” Jack said. “She worked on it for two to three years and she was slipping. They said focus on the river, the store and the family. She was very interested in her family. They weren’t ostentatious, but they were community leaders.”

Mary’s parents Hugh and Annie Kedey Baird, her grandmother Annie Campbell Kedey, and her sister Jean all lived together in the brick house on the banks of the Grand River as the Ottawa was also known as not that long ago. The General Store, built by her grandparents on the Baird side, was less than a three-minute walk away and is still a store serving the community. The Grandview Hotel, built by Mary’s great grandparents and eventually taken over by her Kedey grandparents, was right next door (but now gone).

“I remember you could get a three-course meal for 25 cents,” Jack said. “And they would often tip 25 cents too.”

All the local logging outfits in Arnprior, Renfrew and beyond would come to the hotel. And after that, it was the roughly 2,000 dam-builders who would frequent the hotel between 1928 to 1932.

Mary, and her husband Jack are accomplished community leaders.

During World War Two, Mary served as a member of the Women’s Royal Canadian Naval Service (WREN). Following that she trained as a nurse at the Royal Victoria Hospital in Montreal and worked at the Toronto Sick Kids Hospital, Vancouver General and Arnprior hospital. Jack was a pilot in the Royal Canadian Air Force during the war but did not fly and sorties – when he finally finished his training the war was slowly ending. Then his co-pilot got sick and they were grounded.

“It wasn’t very illustrious,” Jack said modestly. “By the time I finished my training, they had too many pilots and my co-pilot had polio.”

Jack got seven years of university “out of my service,” studied philosophy and became a minister with the United Church. Jack’s father Albert was also a minister. Jack was the first of 13 kids in his own family to get an education. After the two got married in 1952 they moved to Pelly, SK where Jack served his pastorate.

Starting in 1954 the two served as missionaries in India until 1959 while simultaneously starting to raise their young family. The couple would have four children – Richard, Peter, Kathy and Barb.

From there Jack served as a minister in Kirkland Lake, Shawinigan and Oshawa before Jack’s last pastorate in Almonte from 1980 to 1988. In 1988, they retired to the Kedey Baird House in Fitzroy Harbour – back where Mary was born, “beside her beloved Ottawa River.”

Jack was also a Fitzroy Harbour native. He played hockey there. He grew up across from Bethel-St. Andrew’s United Church on a road now officially known as Jack Lougheed Way (“I don’t know why they named the road after me, I never did anything.”). Jack knew Mary almost their entire lives.

“I knew her as a girl,” Jack said. “I thought she was beautiful.”

“I thought the Bairds were rich people,” Jack said. “They had a cottage and a boat and went to the World’s Fair. They were church-going, they fed the poor. They were highly respected people and I admired them. When I was young it was kind of a shack town. There were a lot of people marooned here when the dam was finished, and they lost their jobs and the Bairds helped.”

Jack says his wife was always an artist.

“She was an artist, I was a talker,” he said. “When she got bored of me talking, she would pick up her sketchbook. She was much more of an historian than I. She had a touch. I’m a thinker, she was a feeler. We were very different, but we never had an argument.”

Jack says Mary had no plans to sell her book.

“Why do people write?” he said. “It’s something that’s in them. It was just a hobby and she wanted to write about history. She had no interest in getting it published. Writing is hard work. It’s exteriorizing the interior. Communication is the greatest thing. We mostly give the books out to family and friends.”

A copy of Along the Grand: From Constance Bay to Fitzroy Harbour can be found in the Arnprior Public Library. 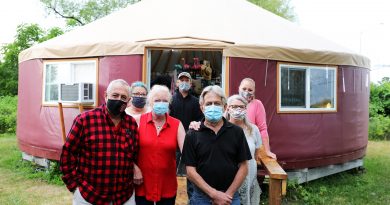