DOUGLAS – One of the fastest growing Irish traditions in the Ottawa Valley has been saved, thanks to the help of Admaston-Bromley Township.

Yes, there will be a Douglas St. Patrick’s Day Parade this year, but the fifth annual version of the immensely popular function almost wasn’t going to happen. Last year there was an estimated 5,000 people that attended the event.

Admaston-Bromley Mayor Michael Donohue says organizers were caught in a liability insurance issue that made hosting the St. Patrick’s Parade beyond their means.

“Liability has become front and centre,” Donohue told Oldies 107.7 FM. “Everyone is out to celebrate St. Patrick’s and the Irish culture, but the larger culture as well, the polyglot culture that is the Ottawa Valley, so it’s important that this continues.”

The mayor says the Parade committee approached the municipality asking if it could help, and after a little research into the legal niceties, the township felt it could help. 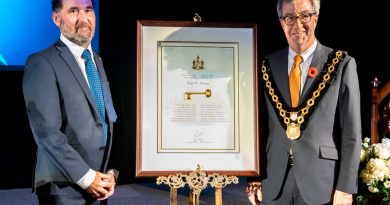 Dewar receives Key to the City

Roofing business up to ceiling with fraud charges