CARP – Lynn Scott is ready to break the quarter century mark as West Carleton’s school board trustee.
But she will have to win the Oct. 22 election to do that.
“I’m ready for four more,” Scott told West Carleton Online during an interview at Alice’s Village Café on July 27. “Mostly because I’m not quite done yet.”
Current Ottawa-Carleton District School Board (OCDSB) vice chair Lynn Scott was first elected to the Carleton Board of Education in 1994. Following school board amalgamation, Scott was again elected to serve on the OCDSB in 1997, she became the first chair of the newly amalgamated board in 1997-1998, served as vice-chair in 2005-2006 and 2006-2007, and again as chair in 2007-2008 and 2008-2009. In her time as a trustee, she has served on or led all the board’s major committees.
OCDSB Zone 1 coves public schools in West Carleton-March, Stittsville and Rideau-Goulbourn.
Scott says one of the tasks she wants to see finished up is a new high school for Stittsville.
“It’s going to be a complicated process,” Scott said. “Local knowledge will be important. It’s going to be a challenge for many communities.”
West Carleton Secondary School officially opened its new wing last fall after more than a year of construction.
“It was something that was very much needed,” Scott said. “It doesn’t solve overcrowding completely, but it certainly helps.”
Kanata North is home to Ottawa’s fastest growing community over the last couple of years, and that affects all of Zone 1, Scott said.
“At some point there is going to be a need for another high school,” she said. “It will take some students from WCSS so we have to make sure we don’t leave WCSS empty.”
Scott’s tenure also gives her some experience unique to the board. She is the only trustee to have ever served under a Progressive Conservative government before dating back to her time in the board during the Mike Harris years – a time educators still talk about with venom in their voice.
“It wasn’t easy,” she said of the time.
There were 1,700 layoffs at the OCDSB during that time, trustee remuneration was dropped to $5,000 a year and boards were amalgamated including Carleton’s board in to the OCDSB.
“It wasn’t fun standing up there making those announcements to parents,” she said.
Issue affecting students today include the topic of sexual education, part of the health curriculum. That curriculum was recently updated in 2014, but the Conservative government says they will revert to the curriculum in circulation before then (which dates back to 1998).
“I have no problem with doing a bit more consultation,” Scott said. “But meanwhile we have students coming in in September and we need to know what to do with those kids. We are really concerned this has been left so late.”
Another issue for the OCDSB is declining enrolment in its English program. Scott says three-quarters of parents now register their children in to French immersion (early French immersion starts in Grade 1).
“There is a growing demand,” Scott said. “When you have less than 10 students per grade in the English program, you have a problem. The challenge is making sure all our programs are strong. We are an English school board.”
In 2019 there will be labour negotiations with the four union groups representing public education.
“We don’t know what will happen with that,” Scott said. “We have a new government that wants to save money. We need a proper review of the funding formula. There are some areas that are problematic.”
Of course, funding is always an issue.
“We still need huge amounts of funding just to maintain our schools,” Scott said. “We have a huge maintenance backlog of hundreds of millions of dollars.”
Scott says, whomever represents the government doesn’t change the work that needs to be done by trustees.
“A lot of decisions are really, really hard,” she said. “You have to do your homework, listen to people, look at the fact and think about the future.”
The OCDSB is made up of 12 trustees elected by zone and two student trustees. The trustees are responsible for overseeing an educational system serving more than 72,000 students in 147 schools and sites.

One thought on “Scott looking for 25th year as trustee” 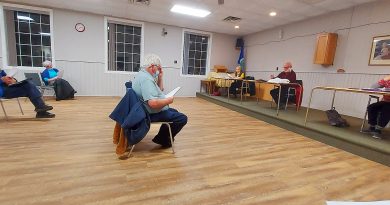