ARNPRIOR – The Arnprior Rivermen are on the road in Kingston this Saturday for a match up against the Frontenac Phantoms, a team they thumped in the Rivermen’s second last home game of the season last weekend (Jan. 14).

The Rivermen (9-7-1) destroyed Frontenac (2-12-1) 10-0 at the Nick Smith Centre last Saturday before getting beat 8-4 by the Bytown Royals (10-4-1) at the Richcraft Sensplex the very next day (Jan. 15) in a rare double-header Eastern Ontario Super Hockey League (EOSHL) weekend for the Rivermen.

“Two-game weekends are always tough, but we need to get used to them for playoff time,” Rivermen coach Mike Byrne told West Carleton Online yesterday (Jan. 18). “Unfortunately, this weekend we didn’t get as many players in to the lineup, so it lead to tired legs.”

“Truthfully, the score against both teams did not represent the games,” Byrne said. “Frontenac kept us to a one-goal game until a minute remaining in the second period. We came out hot to start the third, but that was due in part to their short bench.”

The Rivermen would score eight goals in the third period.

Also scoring for the Rivermen was Luca Nocita, Alex Hulford and Dan Johnson.

On Sunday, the Rivermen gave up four goals to the Royals in the first period and were never able to get back in the game. Jesse Dick scored twice for the Rivermen and Carter Peck and Don Gaudreault added single goals.

Former Rivermen and Carp native Ryley Egan had a goal and an assist for the Royals.

“On Sunday, we had a few bad bounces to start, but we had lots of pressure on Bytown and chances to tie the game,” Byrne said. “Full credit to their goaltender, he made some awesome saves.”

The Rivermen will close out the EOSHL regular season with games against Frontenac (Jan. 21), the Tweed Oil Kings (Jan. 28) and the South Grenville Rangers (Feb 4).

All 12 teams make the EOSHL playoffs this season so it’s all about playoff seeding. The Rivermen currently sit in second in the six-team EOSHL West Division. The top two teams get a bye in the first round of the playoffs. Third spot plays sixth and fourth spot plays fifth in the first round.

The Gananoque Islanders (11-4) are in first, three points ahead of the Rivermen. The Smith Falls Rideaus (8-6-1) and the Tweed Oil Kings (8-6-1) are two points behind the Rivermen at 17. The Deseronto Bulldogs have 16 points, and the Phantoms are at five.

The Rivermen, at this point could finish in any position in the west aside from last place, bottled up by the Phantoms.

“While a bye would be nice, Sunday’s loss is going to make that tough,” Byrne said. “We’d have to win out and get some help along the way. Either way, it’s important to play our best hockey going in to the playoffs. I hope our team can lock down the defensive zone a bit more, and that we can come out of the gate a bit quicker and avoid falling behind early. We have three really good tests prior to the end of season, which should show us what we are really made of.”

The Rivermen’s last home game of the regular season is Jan. 28 and the team plans on putting on a show. For free.

It will be an important one, as the Oil Kings are only two points behind, but have two games at hand heading in to the final stretch.

The Town of Arnprior is sponsoring the game, making it free to attend. The Rivermen will be accepting monetary and canned food donations for the Arnprior Food Bank.

“Now is your chance to come see what senior hockey is all about, free of charge,” the Rivermen released in a statement. “Bring the whole family. We really hope we can fill the arena for this game and our awesome town can help us secure second in the division.”

There is a licensed section in the stands of the Bert Hall Arena, and Arnprior’s own Cold Bear beer is available as well as other options. The team will host its usual chuck-a-puck contest and 50/50. It is a 4:30 p.m. start at the Nick Smith Centre (77 James St.). 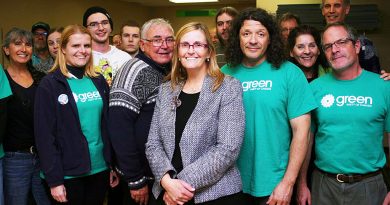