ARNPRIOR – It was an important 5-4 win for the Arnprior Rivermen last Saturday (Oct. 22) getting the team back to .500; in to the playoffs; and a win at home before heading on the road this weekend in Eastern Ontario Super Hockey League (EOSHL) action.

The Rivermen (2-2-1) beat their EOSHL Original Four rivals the Cornwall Prowlers (1-3-0) 5-4 in the Bert Hall Arena last Saturday. The Rivermen faced the Prowlers in the EOSHL’s inaugural 2019-2020 season championship series losing in Game 5.

Saturday was a different story, as the Rivermen took a 3-0 lead in the first period with two goals from Joshua Snider and one from Ryan Peck.

Cornwall got one back eight minutes in to the second before the Rivermen added two more. Ryan Peck got his second and Carter Peck scored as well. The Rivermen weathered the Prowlers’ storm as Cornwall scored two power play goals and one shorthanded goal coming up just short of the comeback in the third period.

Early in the season West Carleton Online has focused on the young blood on the Rivermen team.

Snider, Saturday’s first game star with two goals and an assist, has played games in all three of the Rivermen’s seasons dating back to when the team was based in West Carleton.

Snider, 30, is a Kanata native who played in the Eastern Ontario Junior Hockey League (EOJHL) for Brockville, Casselman, South Grenville and Prescott.

Rivermen coach Mike Byrne says Snider is someone who does anything he needs him to do for the Rivermen.

“Josh is a solid player at both ends of the ice,” Byrne told West Carleton Online yesterday (Oct. 27). “When we need someone to play physical, he plays physical (Snider had 58 penalty minutes in 14 games in his first season with the Rivermen). When we need someone to kill a penalty, he kills the penalty. He also seems to have a knack for big goals, which he proved again on Saturday.”

While Rivermen goalie Erik Miksik didn’t get any love from the three star selectors Saturday, he did from his own team who awarded him the Mulvihill Insurance Player of the Game award following Saturday’s win. Miksik stopped 32 of 36 shots in the game helping the Rivermen earn the win.

The 30-year-old Kanata native is also a three-season player for the Rivermen. Growing up Miksik played for the Kanata Blazers U18 team before playing in the EOJHL for Stittsville, Athens and the Arnprior Packers in 2013-2014.

He has played seven playoff games for the Rivermen with a 4-3 record and .873 GAA.

“Erik Miksik, in my opinion is one of, if not the best, goalies in the league,” Byrne said. “When he’s on his game, he’s very hard to beat. The shots against may not show it, but without him, it easily could have been a lopsided win for Cornwall.”

As mentioned earlier, the win was important for the Rivermen on many fronts, and Byrne agrees.

“Saturday was a huge win for us, especially given the fact we held onto a lead in the third period after blowing the lead the previous Saturday. I think our team learned two things on Saturday: it won’t ever be easy, and we can play with the best of them.”

The win puts the Rivermen in the final EOSHL West Division playoff spot, but only by one point. Byrne wants this win to be the start of some momentum-building and an opportunity to solidify that playoff spot early in the season.

This Saturday (Oct. 29) the Rivermen head down to Gananoque for a rematch against the Islanders (4-0-0) who were the victors in that blown lead last Saturday. The Islanders sit atop the EOSHL West Division standings and have only let in 16 goals this season – the fewest in the 12-team league.

“Gananoque came to us with a short bench two weeks ago, and they still put up a lot of offence,” Byrne said. “I’m expecting them to have a full line-up, and to be a team that moves the puck really well. From the goaltender out, they are a very strong team, as shown by their unbeaten record. It’ll be a tough test but one the team is up for.”

The Rivermen return to their home rink at the Nick Smith Centre in Arnprior against the Deseronto Bulldogs (1-3-0) on Saturday, Nov. 5 at 7:30 p.m. 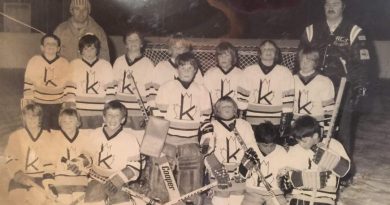 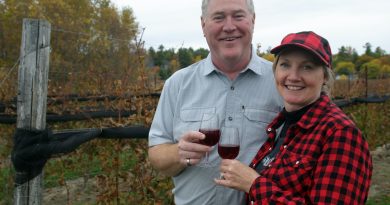