One hundred fans came out to see the Rivermen (10-5-0-2-1) win 9-5 over the Pipers (6-9-1-2) in Eastern Ontario Senior Hockey League (EOSHL) action, keeping the Arnprior-based team in second in the six-team EOSHL West Division.

The Rivermen played the entire game with a lead starting 20 seconds in to the game on a goal from Stittsville defenceman Ryan Duhaime. Team owner, Galetta’s Adrian Moyes scored the Rivermen’s second goal of the first period and then Hulford went to work in the second scoring the Rivermen’s next three goals. He would end the night with four goals and three assists scoring all four of his goals in the second period.

Hulford’s seven points is the most in one game for a Riverman in league history. It didn’t go unnoticed by Hulford’s coach Mike Byrne.

“Alex Hulford is a dominant player in this league,” Byrne told West Carleton Online today (Feb. 14) showing the Davenport University alum some love on Valentine’s Day. “He is a complete player and is very smart with the puck. From a coaching perspective, he is fun to watch and fun to coach.”

Hulford, 27, played four years at the university in the American Collegiate Hockey Association (ACHA) where he scored 82 goals and 94 assists in 126 games. Hulford is a graduate of the Ottawa Valley Titans U18 AAA program where he played in 2010-2011.

Hulford sits in sixth in the EOSHL regular season scoring race with 15 goals and 12 assists for 27 points in 16 games. Four of those goals came on the powerplay.

Hulford was an original Rivermen playing in the inaugural season of the EOSHL in 2019-2020. He was among the league leaders that year as well with 21 goals and 22 assists in 18 games.

“He seems to have taken his game to another level and it couldn’t be happening at a better time,” Byrne said.

The regular season ends on two more weeks for the Rivermen with the playoffs following. Hulford had eight goals and five assists in seven playoff games in 2020 when the Rivermen lost the fifth game in the finals to inaugural EOSHL champions the Cornwall Prowlers.

While the Rivermen look like they are on a collision course with the Tweed Oil Kings (10-3-0-2-0) in the first round of the playoffs. The two teams might switch spots between second and third in west, but that is about the only thing that could happen as the season runway runs out. Byrne says he’s not thinking about the playoffs yet.

“Truthfully, I’m taking things game by game and haven’t thought about playoff matchups,” Byrne said. “We still need to win games to ensure Gananoque doesn’t pass us, and the Tweed/Smiths Falls game this Saturday (Feb. 19) also has major implications on the standings. This is just part of my strategy as a coach, never looking any further ahead than the next game.”

And that next game is against the EOSHL West’s cellar-dwellers, the Frontenac Phantoms (3-10-0-0-1) at home at the Bert Hall Arena inside the Nick Smith Centre in Arnprior Saturday (Feb. 19) at 12:20 p.m.

“The Phantoms are a much better team than their record shows,” Byrne said. “They work extremely hard, and we will have to match their energy. It is crucial for us to get off to a good start, as many of our issues this year have come from playing from behind. Saturday should be a high speed, skilled hockey game, and I’m looking forward to our team matching the Phantoms energy.”

The Rivermen’s final game of the EOSHL regular season is also at home against the Gananoque Islanders Saturday, Feb. 26 at 12:20 p.m.

Tickets are $10 for adults, $8 for seniors and 18-and-younger are free with a paying adult. Tickets available at the gate. Don’t forget fan favourite Chuck-a-Puck and other great promotions at the game. 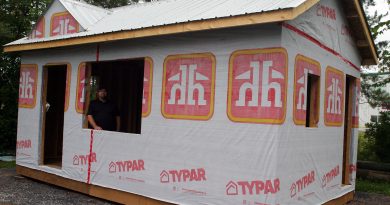