Any Payton Jardine is exactly what any good hockey team could use – a big, strong, hard-working West Carleton farm boy.

“The West Carleton Rivermen are pleased to announce the signing of Payton Jardine,” the team released in a statement yesterday (Sept. 23).

Jardine earned his spot the hard way, by participating in the team’s open tryout earlier this month.

Jardine comes to the Rivermen after a four-year career in the CCHL2, most of which was spent with the Arnprior Packers. Jardine also played in a handful of games with the Pembroke Lumber Kings of the CCHL.

Jardine, grew up near Fitzroy Harbour, on Pinto Valley Ranch and is the son of Benny and Tracey Jardine. Years spent working on the ranch have paid off for Jardine. Not only does that back-breaking work build character, discipline and teamwork skills, many summers of haying are sure to create one heck of a core.

“The Rivermen are thrilled to add Payton’s speed to the lineup,” Byrne said. “Please join us in welcoming Payton.”

“Thank you for the opportunity,” Jardine said. “Looking forward to the season.” 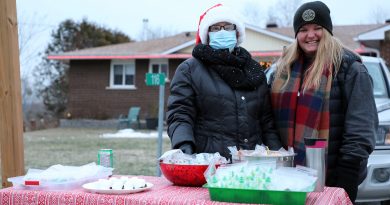