Former Councilor, Town of Carleton Place, and Lay Minister, Zion-Memorial United Church.
Peacefully in hospital at Carleton Place, Ontario on Friday, Oct 12, in her 90th year.
Beloved wife of the late Andrew J. Dickie. Treasured mother of Elizabeth, Brian, Keith, Stephen, Neil. Much loved grandmother of Ryan, Kyle, Emmett, Jordan, Josh, Zach, Karsten, Shayley, Katie, and honorary grandchildren Devon, Carly, and Caitlin. Great-grandmother of Jayden. Aunt and great-Aunt to many nieces and nephews. Born in Grand Falls, Nfld., Trudi was daughter of the Rev. S.J. Hillier and Mary Hillier. Predeceased by her brother Norman, and survived by her brother Jack and sister Mary-Lou. She attended secondary school at Grand Falls Academy in Grand Falls, Newfoundland and attained an honors average in each year of high school. After graduation she trained as a Registered Nurse at the Royal Victoria Hospital in Montreal. For a time, she worked at the Montreal Neurological Institute under the direction of the world-renowned Dr. Wilder Penfield. Following marriage to Andrew Dickie in 1960, for 15+ years she devoted herself to raising her family of five children, and was also an active member of Zion Memorial Church, serving as Superintendent of the Sunday School for several years.In the 70’s she became interested in town affairs, and served on Town Council 1976-1982 and 1985-1988. For most of the 1980’s she also served as manager of the Carleton Place Chamber of Commerce.Soon after the passing of her husband Andrew in 1990, she set aside her civic activities and began study to qualify as a Lay Minister in the United Church of Canada. She attained designation as a Lay Minister in the early 90’s and served in that role at Zion-Memorial Church for nearly 20 years.Our entire family is beyond grateful to the staff of Carleton Place Hospital for the exceptional care, professionalism and patience shown to Mom and to all of us during the ten days she stayed there. Special thanks also to Mum’s long-time physician, Dr. Walker. For those who wish, a donation to Mum’s favorite charity, the Carleton Place & District Memorial Hospital would be appreciated.There will be no wake or public viewing. A memorial gathering will be held on Thursday October 18 2018, 5 – 8 p.m. at the Alan R. Barker Funeral Home, 19 McArthur Ave, Carleton Place. Private interment following cremation will be held at Union Cemetery in Belleisle Creek, N.B. 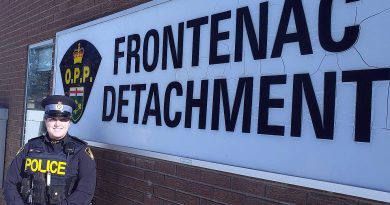 A day in the life: OPP Sgt. Jen Coles