Born January 25, 1929 Agria Volos, Greece. Passed away September 2, 2018 at the Hull Hospital. Beloved husband of Rita with whom he shared 64 years of marriage. He will be remembered by daughter Andrea (Edward) and her children Zoë and Evangelos and their father John, son George and his children Cicely, Lydia, and Cole and their mother Lana, and son Gerasimos “Gerry” (Pam) and their children Emma and Hannah and many other extended family members and friends. Evan immigrated to Canada to study electrical engineering at the University of Toronto. He had a successful and long career with Ontario Hydro and Arnprior Hydro. While in Toronto, Evan was involved in the Greek community and remained proud of his Greek heritage. He would happily talk about Greece with anyone who was interested. Evan and Rita eventually settled in Pakenham in 1976 and in his retirement years was a regular volunteer at the library. He especially loved spending time on their rural property near Perth. Sincere thanks to the many dear friends and family who supported him in the past year. Special thanks to Dr. Isabelle Delarosbil and the wonderful 6th floor team at the Hull Hospital who treated Evan with care and respect. A Funeral Liturgy will be celebrated in St. Peter Celestine Roman Catholic Church, Pakenham on Friday, September 7 at 11:00 am. Interment Parish Cemetery, Indian Hill Road, with reception to follow.  In lieu of flowers, the family would encourage donations be made to the Arnprior Food Bank or the Dementia Society of Ottawa and Renfrew County. Entrusted to the professional care of the Pilon Family Funeral Home and Chapel Ltd., 50 John Street North, Arnprior. 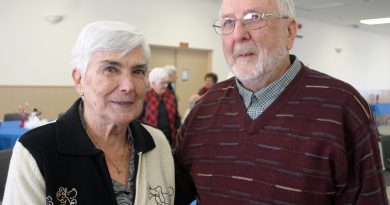