The Dunrobin Women’s Institute (WI) hosted Nicholson at their regular monthly meeting last night (March 5) and organizers were surprised by the great turnout.

“I really didn’t expect the turnout to be so good,” WI President Beth McEwen told West Carleton Online in an email interview.

McEwen says about 60 people came out to hear Nicholson speak, including another of West Carleton’s heroes – one of the members of the West Carleton peewee A Warriors who recently won the Good Deeds Cup and earned $100,000 for tornado relief.

Nicholson was one of the best Para ice hockey (formerly sledge hockey) players in the world, winning three medals at separate Paralympic games and competing in 11 world championships as well as many other tournaments throughout his career. He wore the C for Canada for several years as well.

Nicholson, after retiring from athletics, stayed involved in sport and has acted as the Chef de Mission at the last Paralympic games; sits on the board of The Abilities Centre Ottawa; and is chair of the Own the Podium committee. The Nicholson family was one of many in Dunrobin that lost their home in the Sept. 21 tornado.

McEwen said the large crowd was not disappointed.

“He was wonderful,” McEwen said. “An incredible life story, very moving and often funny. His parents were there, as well as Emily (Glossop-Nicholson, his wife) and the twins.”

McEwen said last night’s meeting was about six times as large as average.

“We usually have only 10 or 12 at our monthly meetings,” McEwen said. “People stayed for almost an hour after his talk for cookies and animated conversation – lots of anticipation for Dunrobin’s summer.”

Learn bridge in Carp in the New Year 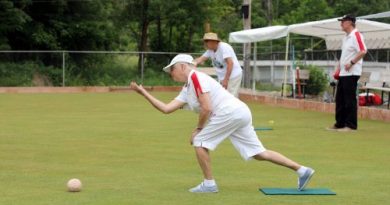