“Water levels and flows from Arnprior to Hawkesbury continue to rise gradually due to on-going snowmelt in the central and northern portions of the Ottawa River basin,” MVCA water resources technologist Jennifer North released in a statement today (April 9). “On Monday a spring storm is expected to bring above average temperatures and a significant amount of rainfall. Minor flood levels may be exceeded in low-lying, flood prone areas depending on the temperatures and precipitation received.”

Levels and flows are expected to stabilize into the weekend and will continue to rise beginning on Monday (April 13).

“Levels are currently expected to remain below major flood thresholds in all locations and are expected to be similar to levels reached in May 2018.” North said.

Water levels are expected to be similar or below the peak levels reached in May 2018 for:

Water levels are expected to be similar or slightly above the peak levels reached in May 2018 for:

“Residents in flood-prone areas are encouraged to closely follow evolving conditions and to take necessary measures to protect their property,” North said. “Residents are advised to stay away from watercourses where flows are high and where banks might be unstable. Parents are encouraged to explain dangers to children.”

The Mississippi Valley, Rideau Valley and South Nation Conservation Authorities monitor
water levels and weather forecasts with the Ministry of Natural Resources and Forestry as part
of the Flood Forecasting and Warning Program. Updates are provided as conditions change.

The Ottawa River Regulating Committee will be reassessing forecast conditions and providing hydrological condition updates on its website daily.

The flood watch is in effect until April 23.

The MVCA says West Carleton’s biggest rivers should not cause problems this spring.

“Flows within the Indian and Carp Rivers have both peaked and are currently dropping,” North said. “No significant flood damage is expected along any these rivers at this time. Flows on the Mississippi River are expected to peak early next week.”

The City of Ottawa is getting ahead of any potential flooding that might occur in the low-lying areas and is placing filled sandbags as well as sand at key locations throughout the city.

“With cooler temperatures forecast over the next few days, levels and flows are expected to stabilize into the weekend,” city staff released in a statement this afternoon (April 9). “On Monday, significant rainfall combined with above average temperatures are expected.  Levels and flows could rise again and exceed minor flood levels starting Monday in flood-prone areas.”

The minor flood level is defined as the level at which parts of some streets/roads, lawns and parks are beginning to flood, with no or few houses/buildings affected by water levels.

“Peak levels are currently not expected to significantly exceed the maximum levels observed in 2018,” staff said.

City crews will continue to monitor areas for response as required.

“Starting today, the city will begin deploying filled sandbags at strategic locations throughout low-lying areas for residents to access.

Residents are reminded to practice physical distancing when collecting sandbags. If your property is at risk call 311. If it is an emergency situation, call 911.

The City of Ottawa currently provides sand and sandbags to residents who live in areas prone to spring flooding at various locations across the city and have recently removed shovels from these sandbag filling sites as these are considered high touch points.

“If you plan to collect sand and sandbags from these locations, we ask that you please bring your own shovels, gloves, and other tools you may require,” city staff said. “Residents are asked to bring their own shovels. Please remember to practice physical distancing and stay at least 2 meters (6 feet) away from other residents while on site. Make an effort to step-aside or pass others quickly and courteously.”

If you are sick or not feeling well please stay home and access the COVID-19 self-assessment tool at Ontario.ca/coronavirus.

“It is encouraged that people dwelling in the same household or people in their immediate families work together in small teams to respect the current social and physical distancing measures set out by the Government of Ontario,” staff said. “If you become unwell while at the site, please return home and complete a self-screening.”

Filled sandbags can be found in these West Carleton areas locations:

The filled sandbags are in large yardbags and will be placed in strategic areas on the city’s right-of-way. We apologize for any inconvenience.

For information on water levels, see the following websites: 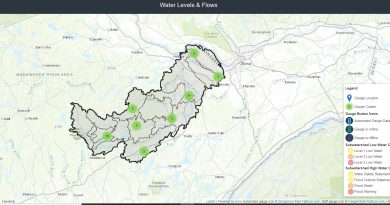