OTTAWA – The number of confirmed cases of COVID-19 in Ottawa has now reached 16, the city’s chief medical officer said Thursday morning (March 19), while issuing a fresh warning that social distancing is more important than ever.

Dr. Vera Etches said the five new COVID-19 cases are classified as “intermediate” because another laboratory test is required before they are confirmed, and they aren’t yet counted on public health’s website.

“It’s this misinterpretation that either the case numbers don’t mean that much or social distancing is working,” she said. “I really want to head that off, because they undermine the effort that is needed now to protect people. People have had the impression over the last couple of days we haven’t had as many cases reported.”

“These are people who became ill, sometimes two weeks ago,” she said. “The case counts are not the whole picture.”

On Sunday (March 15), Dr. Vera Etches said there could be between 200 and 1,000 positive cases of the coronavirus in Ottawa based on what OPH knows about how many confirmed cases there have been in the city and how the virus spreads.

On Thursday (March 19), she said the number of cases of COVID-19 generally double every four to five days.

“There might be over a couple of thousand now, it’s possible, based on what we know,” she said.

Dr. Etches said one case usually gives rise to two others, and that’s why social distancing is so important – health officials want to slow the spread to give local hospitals the chance to keep up with demand.

The Medical Officer of Health said most people will get through this and be able to manage at home, so they don’t need to know every single local person that has it. Dr. Etches added that residents should be acting as if they and their neighbours might already have it anyway, and be practicing social distancing and hand-washing.

Dr. Etches said provincial officials are working with local health care providers to see where a second COVID-19 assessment centre could go, but she said it could have a slightly different function than the centre at Brewer Arena.

The second centre may be less about testing for the coronavirus and more about providing clinical assessment and general health care, to keep people out of hospitals. More details on the location and operation of that facility are expected within a week.

Etches also said it’s too early to tell whether social distancing is working to help stem the tide of the outbreak.

She said it’s simply too early to tell, but she does know that the actions being taken today – residents working from home, businesses closing, events/gatherings cancelled – are making a difference, as it’s been proven to slow the spread of the virus in other countries.

The doctor explained that it usually takes about 10 days to understand the impact of an action taken: Someone who might be exposed to COVID-19 might not show symptoms for four or five days, then they would get sick, then get tested, then it would be about four or five days to get those results.

As for how long social distancing protocols could stay in place, Ottawa Public Health continues to look to the province to provide guidance. As of Thursday, Dr. Etches said they’re taking it to April 5, but she expects there will be talks before then to see if measures need to be extended.

“Unfortunately, we have to maintain this social distancing for at least two weeks until we know if it’s changing the numbers, because those cases we’re counting now are old,” she said. “Stay home and stay safe.”

As of Thursday morning, Canada had more than 720 confirmed cases of the virus, including more than 200 in Ontario.

Trudeau pledges $82 billion in support in midst of COVID-19

CANADA – The federal government is implementing a new set of economic measures to help stabilize the economy, and help Canadians affected by the impacts of the COVID-19 pandemic.

The Government of Canada announced Wednesday morning that its COVID-19 Economic Response Plan will provide up to $27-billion in direct support to Canadian workers and businesses, plus $55-billion to meet liquidity needs of Canadian businesses and households through tax deferrals to help stabilize the economy.

Combined, this $82 billion in support represents more than three per cent of Canada’s GDP.

Prime Minister Justin Trudeau said this support will help ensure Canadians can pay for rent and groceries, as well as help businesses continue to pay their employees and bills during this time of uncertainty.

He added, Canadians should also not have to make health decisions based on their financial needs. As the situation continues to evolve, the government is expected to announce further measures to support Canadians, stimulate the economy, and protect peoples’ jobs and livelihoods.

“These are extraordinary times and we must take extraordinary measures,” said Minister of Finance Bill Morneau. “The Government of Canada will do whatever it takes to ensure that the health of Canadians is protected, families and businesses are supported, and our economy remains strong, even in the face of uncertainty. I am working with the financial sector, the Bank of Canada, my provincial and territorial colleagues, and my counterparts from around the world to keep coordinating on significant actions to protect the Canadian and global economy. Canadians can rest assured that we are ready to take all necessary measures to meet the challenges ahead.”

CANADA – The Canada-U.S. border will be closed to non-essential traffic in both directions “by mutual consent,” President Donald Trump confirmed Wednesday as efforts across the continent to contain the widening COVID-19 pandemic continued to upend daily life in North America.

Trump disclosed the news on Twitter shortly after stock markets opened, following media reports in both countries that said the White House and the federal Liberal government were in talks to find a mutually agreeable way to limit the cross-border spread of the virus without choking off vital lines of commerce.

“We will be, by mutual consent, temporarily closing our Northern Border with Canada to non-essential traffic,” Trump tweeted. “Trade will not be affected.”

Sources in Ottawa say both sides have been in talks to limit travel in both directions across the border without restricting the all-important flow of trade and commerce between the two countries at a time when the global economy is under severe pressure.

Discussions have been focused on determining which essential workers might be exempted — a group that could include mission-critical truck drivers, airline crew members and health-care workers who live and work on opposite sides of the border.

Officials in the Prime Minister’s Office said Tuesday there would also likely be a temporary exemption for Canadians who winter in the southern U.S. in order to give them time to get home.

OTTAWA – The University of Ottawa has informed its students they have until Sunday to move out of campus residence.

Due to the COVID-19 outbreak, university officials said the decision to have students move out early is for their own safety and for the safety of the community.

The announcement does not apply to international students or those with exceptional circumstances.

uOttawa officials said in a statement that the move is a necessary step to employ social distancing and reduce the impact of the virus.

As of Wednesday morning, both Carleton University and Algonquin College students are not being forced to move off campus. A statement on the university’s website said that they strongly recommend those who can go home do so as soon as possible.

Algonquin College has also asked students who are able to move out are being asked to do so by end of day Sunday.

A statement on the Algonquin website said the college will be refunding residence fees on a pro-rated basis to March 22 and remaining meal plan balances will be refunded to student accounts.

Services at both residences will be limited but student services are still open for those staying on campus.

OTTAWA – All hospitals in the Ottawa region say they are taking a planned approach to postpone non-urgent surgeries and procedures, as well as outpatient programming and clinics, as the coronavirus situation continuies to evolve locally.

A joint statement from Bruyère, the Children’s Hopsital of Eastern Ontario (CHEO), Montfort, The Ottawa Hospital, The Royal Ottawa Mental Health Care, The University of Ottawa Heart Institute, and Queensway Carleton Hospital says reducing activity in operating rooms and other areas of the hospitals allows each to be ready to take on potential COVID-19 cases.

The Tuesday afternoon statement explains that postponed events will be selected on a set of clear criteria, to carefully consider the healthcare needs of our patients while maintaining their safety.

Hospital staff are in the process of notifying patients, so that they have all the information they need regarding their care.

KANATA – Another positive COVID-19 case in Ottawa is being linked to tech company Ciena, which has an office in Kanata.

There has been no word on whether or not the company will be extending the closure of its local office after yet another positive coronavirus case.

Ottawa’s first confirmed case of COVID-19 was in a Ciena employee who had just returned from Austria. 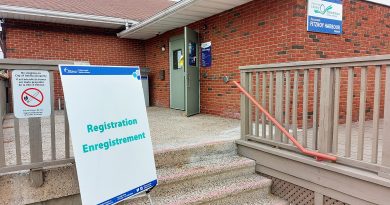 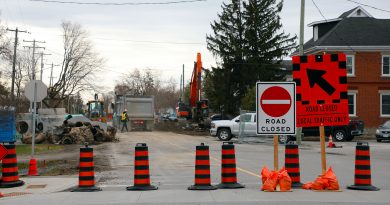