Rick Munro and Dave Timms captured the annual Ryder Cup competition held on June 3. Munro and Timms lapped the field with a net 54 to capture this major team event in the
Madawaska Golf Club schedule. Gary Wall and Lloyd Powell finished in 2nd position with a net 59 followed by Jon and Perry Freda at 61 and Gary and Jay Grainger at 61.7. Munro and Timms have vowed to be humble champions until their opportunity to defend the title comes along in 2019. The opening field day was won by Lloyd Powell with a net 66 followed by Perry Freda, Matt Brown and Gary Grainger. Danny Mac’s in Arnprior sponsored the May 31 Men’s day. Caleb Brown and Jon Freda were the A flight winners followed by Ken Borg and Ray Kulchyski in B flight. Brent Mosley and Brian Wallace were the C flight winners and the D flight winners were Mark Murdoch and Gilbert Paquette. The long drivers were Bill Desoteaux and Steve Marsh and the closest to the pin winners were Dennis Bouchard and Hal Grainger. Matt Brown was the long putter for the day.
The Madawaska Golf Club sponsored the June 8 Men’s day. Curtis Proulx and Perry Freda were the A flight winners. Drew Lavictoire and Dave Babineau were the B flight winners followed by Lloyd Powell and Brent Mosley in C flight. Richard Brule and Braeden Broome were the D flight winners for the evening. Rob Frietag was the long driver and Scott Collins won the long putt and closest to the pin honours. Dean Brown and Mark Murdoch were the closets to the pin winners for the evening and Robert Caruthers was the closest to the line winner.
The 2 Grands Piano Bar and Steakhouse sponsored Mens day on June 14. Perry Freda and Dan McCaskill were the A flight winners followed by Brian Bonnar and Ray Kulchyski in B flight. Tom McFarlane and Harold Grose were the D flight winners and Andrew Reid and Ben Jones were the C flight winners.
Curtis Proulx and Ben Jones were the long drivers with Bill Descoteaux and Ben Jones winning the closest to the pin for the day. Tony Defalco was the long putt winner. Men’s day on June 22 was sponsored by Milikens Landscape and Garden Center in Arnprior..
Curtis Proulx and Kevin Ryan were the A flight winners followed by Ray Kulchyski and Dave Babineau in B flight. Gary Wall and Terry Smeltzer were the C flight winners followed by Richard Brule and Victor Garbutt in D flight. The long drivers were Matt Brown and Kevin “The Legend” Ledgerwood. Dean Brown and Richard Brule were the closest to the pin winners and Curtis Blokland was the long putter
The Men’s regular OVGA Intersectional Matches will be held at the Madawaska Golf Club on July 8 and the current leaders include Perry Freda, Gary Grainger, Jon Freda, Jack Killeen, Matt Brown and Dan McCaskill. Congratulations to Victoria Oliver, Maureen Dunnigan and others who participated in the 100 holes of golf on June 21 in support of Hospice Renfrew. A 6 am start time was a little early for the ladies but they completed the day in a little over 13 ours and met their goal of raising over $1,000 for this very worthy cause. Great job Ladies and to everyone who supported the day. Good luck to all of the golfers and please visit the clubs website for the latest news and special offers. 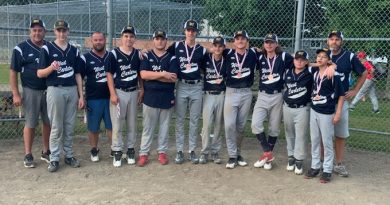