CONSTANCE BAY – The hundreds of homeowners affected by this spring’s extreme flooding are tired, at the end of their rope and at a loss of what to do next. Stay, repair, rebuild or get out of town?

It’s an emotional issue with a lot of contributing factors. Some homeowners are hoping for a buyout similar to what homeowners are being offered in Quebec. Others would like to see grant money to help with repairs. Many, having gone through two record-breaking floods in three years, think it’s time to get out – if they even can.

“Your topic is what I’m dealing with this morning,” long-time West Carlton realtor John Roberts told West Carleton Online last week. “Right now. people have a lot of questions. How do we sell? Can we insure? Can we get a mortgage?”

It’s a busy time for the Remax Hallmark Realty Group Real Estate broker. Not selling houses but talking to clients who are unsure of what this ongoing flooding will mean for their largest investment.

“We don’t know the answers either yet,” Roberts said.

Roberts started in the property business in 1989. He moved his business and his family to Constance Bay and West Carleton in 1991. He became a Remax Hall of Fame member in 1999 and received the Remax Lifetime Achievement award in 2008.

Currently he is pumping his basement, like so many of his neighbours, hoping to keep the Ottawa River out of his home.

Roberts says despite the water his house is still “quite livable” but he can relate to the stress and workload this spring’s flooding has on the West Carleton community.

“The length of the flooding, the height of the water,” he said. “People are putting the families, their children, their jobs on hold trying to deal with this. It’s not viable.”

Professionally, Roberts when through this in 2017 which was at the time historic level flooding. There was a noticeable effect on business.

Then the Ottawa River rose to heights not seen by the current generation of homeowners in West Carleton.

“It was not nearly as dramatic as it was this year, but we had a 25 per cent drop in the number of sales – not the value,” Roberts said.

Despite the flooding, people still want to live by the water.

“The desire was still there,” Roberts said. “We never deviate too far from the water. We saw some houses sitting on the market, but we started to recover. And then it hit again.”

Now, like many homeowners, Roberts is unsure of what the future will hold.

“How do you flood proof?” he said. “Is this a one-in-100-year flood? Or will it happen every year? People want continuity. Until we can come up with an answer on what we can do to fix this long-term, nobody knows. Getting back to where we are doesn’t fix the problem.”

Roberts says these homeowners followed all regulations to build their homes where they are.

“How do we have properties that were approved at all levels that are still at risk of flooding?” he said. “I’m not blaming anyone. There are three or four governments, two provinces. How do we get on top of this? It’s billions of dollars. We can’t do this every two or three years.”

Roberts said he would like the province to step up and offer some sort of buyout or grant. In the meantime, although it’s running thin, he says homeowners should show patience.

“It’s very hard to predict what’s going to happen,” he said. “The first step is trying to remediate your house. Think about what your doing before you make any rash decisions.” 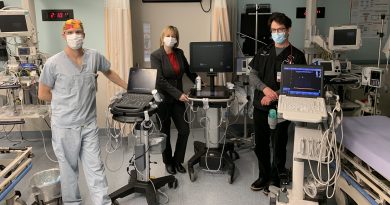