Here we will share some results of some of the nearby municipalities and wards as well as more from mayor-elect Mark Sutcliffe’s victory speech.

Many say, of the three levels of government, municipal politics is where the rubber hits the road. But that didn’t resonate with voters.

“Over the course of this campaign, we built a coalition of people from throughout the city and across the political spectrum,” Sutcliffe said after being declared the winner yesterday (Oct. 24) evening. “I want to thank the hundreds of volunteers who put extraordinary time and effort into this campaign. Although there is only one name on the ballot, this was completely a team effort, and I was only one member of that team. So, thank you all so much. I love you all.”

The mayor-elect had some words for the new Ward 5 councillor-elect Clarke Kelly and the 23 other councillors that will join him at City Hall.

“To the 24 people who have been elected to serve on the next city council, I want to say congratulations,” Sutcliffe said. “I’m ready to work with all of you to make Ottawa better for everyone. To all the people who put their names forward in this campaign, thank you for making the sacrifice to contribute to our democracy. Running for office is a form of service to your community and we are grateful for your service.”

Sutcliffe also had some words for the residents of Ottawa.

“This election was never about me or any other candidate,” he said. “It was always about you, the people of Ottawa, and the kind of city we can build together. Tonight, the people of Ottawa made a clear decision. You voted for positive change. You voted for compassion and fiscal responsibility. You voted for a safer, more reliable, more affordable city. You voted for an approach that works for all of Ottawa. As I have said every day during this campaign, I will respect every part of the city, the rural areas, the suburbs, and the urban areas. I will listen to you, I will respect you, I will work hard for you. For all of you.”

Scott was first elected to the board in 1994 and is in her 28th year as a trustee.

“People wanted change,” McGee said following the election. “They saw the last term and they wanted some change.”

McNab-Braeside will also have a new mayor as former councillor Mark MacKenzie was elected mayor with 43.8 per cent of the vote.

In Mississippi Mills, Mayor Christa Lowry was acclaimed months ago.

Toby Randell will be Carleton Place mayor for the 2022-2026 council term.

A lifelong Carleton Place citizen, Randell joined council in 2018. When he is not considering and making decisions on important issues, the married father of five co-owns Blade Sports at the local arena.

In Kanata North, Cathy Curry won her first election after being appointed to the role after MP Jenna Sudds stepped down to run in the federal election.

Of West Carleton-March’s neighbouring wards, only Rideau-Goulbourn Ward will have a new mayor, as Scott Moffatt did not seek re-election. David Brown won the ward by a large margin, more than 5,500 votes over Leigh-Andrea Brunet, Michael J Nowak, Patty Searl and Kevin Setia. 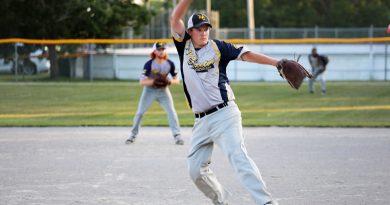