CONSTANCE BAY – In the midst of a heatwave, and with nothing else to do, large crowds descended on Constance Bay beaches last weekend sparking fears of COVID-19 spread.

“Given the amount of outside traffic that will flow into Constance Bay this upcoming (weekend), and future weeks, neither yourself or the city are taking the appropriate precautions to ensure Constance Bay remains (COVID-19) free,” he wrote.

Doyle snapped a photo of the cleaning schedule which indicated the portable toilet had only been cleaned five times in the last 10 days.

On Sunday (June 21) Doyle, a Bayview Drive resident, followed that email up with another addressed to the councillor, Mayor Jim Watson and public health officer Dr. Vera Etches.

“Ottawa city has demonstrated a complete disregard for the health, safety and well-being of the residents of currently COVID-free Constance Bay in West Carleton,” Doyle wrote. “It was brought to my attention on Friday (June 19) Ottawa city had installed portable toilets in at least two locations in Constance Bay. There was an expressed concern these toilets were not receiving due care and attention in this COVID environment. Toilets at official Ottawa city beaches are continuously cleaned by full time attendants, and toilets are sanitized every 24 hours. No signs exist near these Constance Bay toilets indicating we are in the midst of a COVID pandemic and to exercise extreme care.”

Doyle said he expected “at worst” to receive a call from the councillor and at best “he would urgently visit Constance Bay personally.” He said neither of those things happened.

“In fact, if Coun. El-Chantiry had come out here (Saturday, June 20) he would have experienced traffic on Dunrobin Road and in The Bay, the likes of which I have never, ever seen in the 38 years I have lived here.”

Doyle said he phoned Ottawa Police Services (OPS) “as a result of the significant numbers of people walking the beach with alcoholic beverages, coolers of all shapes and sizes, and beer cartons” suggesting they set up a RIDE program.

“Your actions, or lack of action, could be a significant factor in creating a COVID spike, and even worse turning Constance Bay into a COVID hotspot,” Doyle concluded.

El-Chantiry responded to Doyle’s email on Sunday at 1:32 p.m. stating he was in Constance Bay Saturday (June 19) and made a call to bylaw services and the OPS “to attend to the high volume of people parking illegally, having unleased dogs and open alcohol.”

He said, at the time, there were four portable toilets in Constance Bay serviced by the city. Two at the beach near The Point Dining Lounge, one at the government boat dock and one at Auger Beach.

“It’s a capacity issue,” El-Chantiry said. “I know it’s large crowds. Too many people. Illegal parking. I asked bylaw to drop by and they did on Saturday and Sunday.”

“It’s the capacity more than anything,” El-Chantiry said.

With almost all recreational activities closed due to COVID-19 pandemic restrictions, and the weekend falling in the midst of a heatwave blanketing the area, people were looking to get out of their homes and find something to do.

“I think he’s trying to make a point about the number of visitors,” El-Chantiry said. “My heart goes out to the community.”

El-Chantiry said it took him about 20 minutes to drive from Lane Street where The Point is located to The Lighthouse Restaurant – a distance of about two kilometres along the Ottawa River.

The city added a fifth portable toilet near the Constance Bay fire station. It was noted several people were going to the bathroom behind the fire hall. They added additional garbage cans and posted new signage regarding physical distancing.

“Though the more you put out, the more people come out,” El-Chantiry said. “We’re going to increase by adding a toilet, we’re going to have more garbage cans and pick garbage up two to three times a week.”

The heatwave has definitely added to the issue.

“It was over capacity, but that was everywhere,” El-Chantiry said. “People are going wherever they are able to.”

As to the toilet cleaning protocols, El-Chantiry says they are being cleaned every day.

“Our staff checked with the company and they said the were cleaned once a day,” he said. “There is no way there would be enough toilet paper to last 48 hours. They’ve made a commitment to clean once a day.”

He said the city is looking at seasonal parking from Lane Street to past Auger Beach but they looked at that in the past as well.

“We brought that up a few years ago and the community rejected it because they wanted family and friends to be able to visit without getting parking tickets,” El-Chantiry said. “I won’t do anything without going back to the community.”

He said he would need about 75 per cent approval to institute seasonal parking in the area. He is also concerned about driving motorists to look for parking on nearby residential streets. 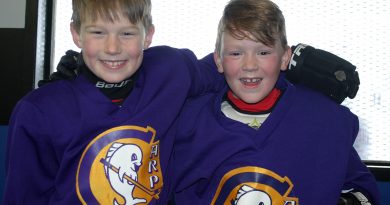