ARNPRIOR – As we head in to round two of the Eastern Ontario Super Hockey League (EOSHL), the West Carleton Rivermen find themselves in the unenviable position of being the favourites in the battle for the EOSHL Western Division Championship.

Round one was incredibly tough on higher seeds.

Both the Rivermen and their division championship match-up, the Gananoque Islanders upset the higher seeds in the first round of the playoffs.

The Rivermen, seeded third in the playoffs, knocked off the west division second seed Tweed Oil Kings needing all three games of the series and 34 extra seconds to do it.

The Islanders did something even more impressive, crushing the EOSHL regular season champion Smith Falls Rideaus 7-0 and finishing them off 6-2 in game two.

The Islanders are the hottest team in the league having won eight of their nine games including the regular season.

“Gananoque has an incredibly skilled team, and has great goaltending,” Rivermen coach Mike Byrne told West Carleton Online earlier this week. “I could be wrong, but I believe the shutout their goaltender had in game one was the first shutout in league history. We are going to have to stay disciplined and ensure we stay away from taking unnecessary chances. Gananoque’s general manager Tom Dickson has put a great team together, and I’m excited to see the skill on display for both teams this weekend.”

The Rivermen will have to find a way to beat Islanders’ goalie Nicholas Nabuurs who has a .969 save percentage in the playoffs making 64 of 66 saves in the series. The 24-year-old Aurora, ON native played five years in Lithuania including three seasons on the U17 national team.

The Rivermen have the firepower to do it. Of teams left in the playoffs, Galetta’s Adrian Moyes is tied with six other players with most playoff points (three goals, two assists) including the team’s overtime winner in game three.

Moyes grew up in Constance Bay and the 33-year-old now calls Galetta home. Before joining the EOSHL as a team owner in 2019, Moyes played semi-pro hockey in Germany for the Salzgitter Icefighters.

One of those other league leaders is teammate defenceman Blake Forslund with one goal and four assists. Forslund, 30, is an Owen Sound native with NCAA and USports experience in a long hockey career.

Stittsville’s Alex Hulford, 27, is second in playoff scoring with three goals in three games. Hulford played junior hockey with the Stittsville Royals and on the Ottawa Valley Titans U18 AAA team and later with Davenport University. Hulford was the Rivermen’s leading scorer in the regular season with 29 points (16 G, 13 A) in 18 games, good enough for fifth in the West Division.

On defence, the Rivermen will have to slow down Islanders forward Ben Blasko who leads the EOSHL playoffs in goal scoring with four in two games. The 29-year-old Kingston native has played both NCAA and USports hockey.

Up to the task is Rivermen defenceman Zack Rheaume who was the 2019-2020 EOSHL Defenceman of the Year in the Rivermen’s inaugural season.

Rheaume, a 27-year-old Gloucester Centre native has had another strong season two years later. In 15 regular season games, Rheaume had 19 points (3 G, 16 A). He has four assists in the EOSHL playoffs so far which ties him for first in helpers in the playoffs with teammate Forslund.

The Rivermen won the EOSHL regular season match-up with the Islanders 2-1.

In the EOSHL East Division, there have been no surprises with one game left to play. The North Dundas Rockets knocked off the defending EOSHL champions from the 2019-2020 season, the Cornwall Prowlers 2-0.

The East Division regular season champion South Grenville Rangers have a 1-0 lead over the Glengarry Pipers with game two set for tomorrow night.

One thought on “Keys to victory Round 2: Rivermen vs. Gananoque” 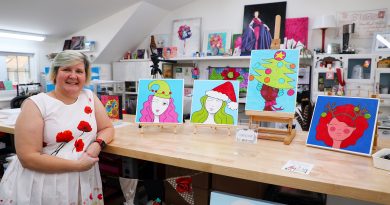 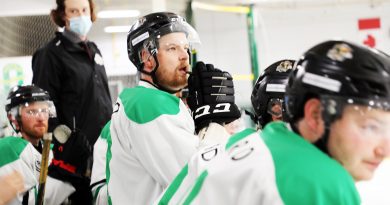