Volunteer organizations are having a tough time everywhere, and that’s no different in Kinburn.

The KCA is a non-profit organization that managed the Kinburn Community Centre, outdoor rink, softball and soccer fields located in downtown Kinburn. They organize community-building social and fundraising events throughout the year for the Kinburn community.

The AGM was the start of big changes for the association. A whole new board is coming in to replace the outgoing board that had finished their two-year term.

The 2017 board, in its final year, focused on improvements to the community centre.

The association spent approximately $7,000 on refurbishments, re-painting the interior, refinishing the floors and replacing the old curtains with blinds.

“Blinds are considered a fixture so we were able to get a grant through the city,” KCA treasurer Karen Matt said (who only joined the board a few months ago). “They’re cleaner and users can decorate them if they wish.”

Matt said those expenditures did put the squeeze on the KCA as it limped towards its year end, Sept. 30.

“There was a bit of a cash crunch in September,” she told the 11 others in attendance (a higher than expected number). “I deposited every cent we had, but we made it through. October was much better but that’s not what this meeting is about.”

Rentals are down in general at the facility. A change in people’s tastes Jayne Coady, who acted as moderator for board elections, said.

“A lot of people out there are still getting married,” Coady said. “But now they’re doing it in old barns, they’re not doing it at community centres. That’s the trend the last two years.”

A reduced rental fee has helped.

“People are still renting,” she said.

Indoor and outdoor maintenance related to the building and grounds (which also includes a small tract in Marathon Village) came to $59,734. Those expenses are paid by the City of Ottawa.

Past President Alex Lesnick’s last official role as president is her 2018 President’s Report – which was read by Matt as Lesnick was not able to attend.

She reported on the events hosted by the KCA including a Halloween dance, craft fair, Brunch with Santa, a Superbowl party and a corn roast.

“We opted not to do an Easter brunch or fun day this year,” Lesnick reported. “With the board being so small, it was difficult to find the time to organize events and with the investments we were making in the building this year, we didn’t want to overextend ourselves either.”

Lesnick addressed the upgrades as well.

“A lot of energy and money was put into building maintenance this year,” Lesnick reported. “As you can see, the main parts of the building have been repainted, curtains replaced with roller shades and the floors refinished. A big thank you to the city for their assistance with the painting project, via the minor capital funding program. Hindsight being what it is, we probably should not have done both the painting and curtains in one year however we felt we had reached a point where it could not be ignored any longer. The hall desperately needed an update, feedback we were getting from prospective renters. It is our expectation that the refreshed building will drive greater rental revenue in 2019.”

Kinburn resident Kelly Barton reported on the ball season. She said there were 90 participants this season.

“We had a great turnout,” she said. “The diamonds need some new dirt. The small diamond needs new benches. We have been told if we apply for a grant, the city will pay half the costs. We will have to plan a fundraiser.”

As the meeting concluded, Kinburn and Area Seniors President Judith Waddell made a $1,000 donation to the KCA for the organization’s support of the senior group.

“The seniors, by the way, built this building,” Waddell said. “I think it’s great that we have the continued support of the KCA.”

The KCA received a few other donations earlier in the month from other user groups as well.

Following the AGM, the KCA held its board elections. All positions need to be filled, but the election is for board members only – the KCA assigns positions following a meeting with the new members to be held at a later date.

The CKCA board meets the third Wednesday of the month in the George Armstrong Conference Room. 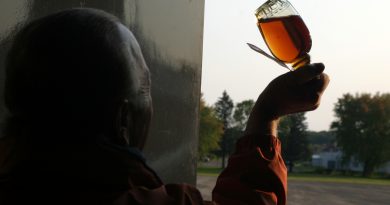 ARH’s Adopt a Memory Box Campaign within reach of goal 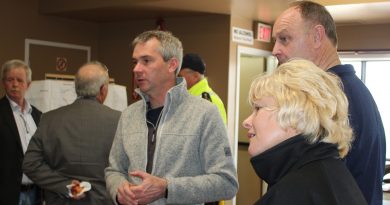