Owner Norm Lecuyer established the business in 1999 bringing a unique, dynamic set of skills to the Ottawa renovation industry.

“Twenty years ago, I left the home inspection business because I wanted to design and build things,” Lecuyer told West Carleton Online from their beautiful showcase office on 2853 Carp Road. “Fairly early on we noticed a trend – the sort of second-level of basements. We are known for making exceptional living basements. We don’t do man-caves – we’re the next level. We think of basements differently. It’s a valuable space in a home.”

And the industry has recognized that “next level.”

The design-build firm has won three national awards and around 10 regional awards from industry organizations such as the Greater Ottawa Home Builders Association.

“We realized we’re kind of good at this,” Lecuyer said.

ARTium and Just Basements are the rare firm that goes from concept to final product all in one stop. The team moved in to their Carp Road offices eight years ago. The office has the house feel – a kitchen, a dining room – all beautifully designed. And of course, an unbelievable basement.

“We have designers and builders on staff – we are all in-house,” Lecuyer said. “We wanted this place to reflect our design philosophy. We’ve kept it as a house and jazzed it up a bit.”

The business has three designers on staff and a total staff of around 20 to help turn their client’s dream in to reality. Lecuyer studied architecture at Palm Beach College.

“We have never used the term rec-room,” Lecuyer said.

Lecuyer says ARTium and Just Basements tend to work in the Ottawa area from St. Laurent, west. They have projects going in the Glebe, Westboro and the south-west end of Ottawa. Lecuyer notices home renovation projects are starting to appear more regularly in West Carleton.

“The area is growing up, we’re seeing that,” Lecuyer said. “Renovations don’t really come until about 10 years after a build.”

Being in the design business means you are also in the customer service business. The goal is to marry sound design practices with the vision of the client – that’s not always easy.

“Many renovations are very personally motivated,” Lecuyer said. “People often don’t get to choose the build. We can come in and move walls etcetera. We want to know what the customer wants to achieve and then we make sure it’s up to code and follows good design practices. It’s an opportunity for the homeowner to build the home they want to achieve.”

So, it’s crucial for the team to work closely with the homeowner.

“We consider them part of the team,” Lecuyer said. “We can’t do it without them. I often say, if you don’t have input, you’re going to get my basement. There is a discovery period – what kind of home we’re working with, the problems the owner is trying to solve. If it’s a fit, we move in to the design-project-development phase. We figure out where we’re going. We do the budgeting – we plan the project in great detail.”

Lecuyer has seen what happens when you don’t follow the process.

“Premature start is the death of a project,” he said. “Design properly, then move forward. We sell an abstract concept for a lot of money. You can’t see it or touch it until it’s done.”

Lecuyer says they often meet with their clients five or six times during the design phase, but it can vary based on the availability of a client.

Designing a business is a lot like designing a renovation project – you don’t want to rush it.

“We’re really proud of what we’ve built over the last 20 years,” Lecuyer said. “But we want to be always improving and building. I’m proud of our team and what we’ve become. The planning stage can be very stressful for a client. We try to make that phase as easy as possible.” 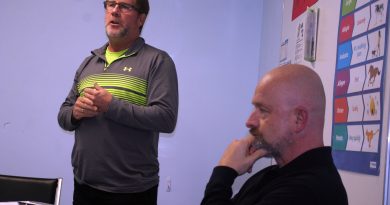